Twins Graham and Gordon Keith came close to winning a bronze medal in the doubles.

Meanwhile Lerwick born Sam Johnson, who has since moved to the Scottish mainland, reached the quarter finals of a singles competition.

More than 1,000 athletes from 33 countries took part in the event, with people aged 35 and over able to compete.

The Keith brothers were taking part in their first European tournament, having played senior contests in Glasgow, and they reached a quarter final in the 60 to 65 doubles. 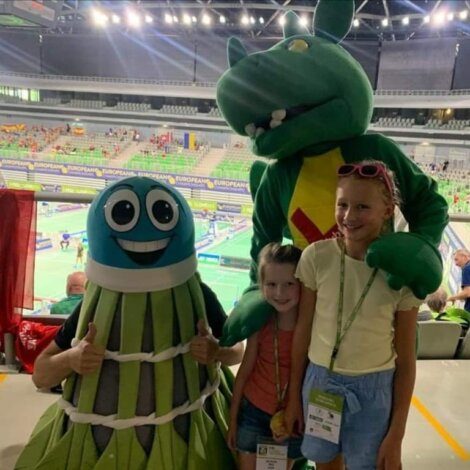 Gordon’s granddaughters Katie (left) and Sophie Mackay (right) were among the family who also made the trip. They are pictured here with the games’ mascots.

Sadly they just lost out 21-16 to English pair Gene Joyner and Roger Leigh.

The Keiths said they were disappointed to miss out on a medal, but were pleased with their performance.

In the singles Gordon Keith got to the last 16 without much trouble, but he lost out to first seed Per Juul from Denmark.

Speaking afterwards he said there was a lot of drift at play, which is when the hall is so large that the air current and movement affects the path of the shuttle.

But he said he was happy with his performance having taken a game off the first seed.

Meanwhile Johnson reached the quarter final in the singles, losing out to eventual winner Jan-Eric Antonsson from Sweden.

He said he was delighted to take 10 and 17 points off the Swede.

The players said they enjoyed their first European tournament and health and injury permitting they will consider trying again in two years time in Dubrovnik in Croatia.