A NEW research project is looking to explore any interaction diving birds may have with the underwater tidal turbines installed in Bluemull Sound.

Over the past couple of weeks 12 shags in the area have been fitted with GPS trackers to study their movement in the channel.

For the most part the study is now over, although six shags are still transmitting data.

It is hoped the research will not only explore if there are any risk to shags from Nova Innovation’s turbines, but should also better understand how shags use areas with strong tidal currents.

PhD researcher at University of the Highlands and Islands Natalie Isaksson, who is leading the study, said it is part of an EU-funded PhD project which started in 2018.

There are a handful of tidal turbines located in Bluemull Sound, the body of water which separates Yell and Unst.

When the initial turbines were installed in 2016, it was the world’s first offshore tidal array. There are currently four on site, with two more planned. 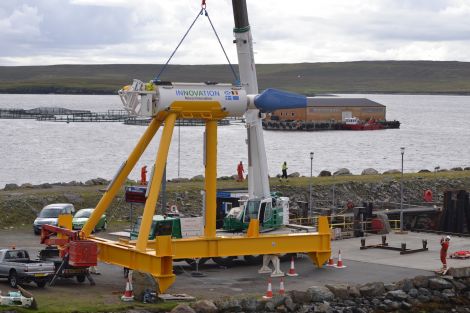 One of the tidal turbines out of the water. Photo: Nova Innovation

Nova Innovation has regularly carried out its own research on the interaction of wildlife over the past few years, and a report published in 2020 reiterated there was a “very low” likelihood of encounters between diving birds and marine mammals and the turbines.

This has used underwater video and land-based studies, but tagging birds directly with trackers should offer a new insight.

“However, there are concerns about the negative effects of these technologies on in many cases already struggling wildlife.

“Seabird breeding numbers in the UK, for instance, have decreased by nine per cent since 2000, with seabirds contending with decreases in forage fish and more frequent severe storms in addition to being at risk of collision and displacement from offshore renewable energy developments.”

They explained that Bluemull Sound is used by a “declining and vulnerable seabird”, the European shag.

They are particularly vulnerable to negative interactions with underwater tidal turbines because they can dive up to 61 metres – within the range of tidal energy devices – in search of food and do so in places with strong tidal currents.

“Apart from knowing that shags use Bluemull Sound, we don’t know whether this translates to real, measurable overlap with the turbine array,” Isaksson added.

“It is possible that while capable of diving to turbine depths, the shags here dive more shallowly, or that they primarily use turbine-free sections of the channel.”

Over the course of two weeks, a team of UHI researches under licence caught a number of shags using nets, covering a variety of ages, and fitted them with bio-logging devices for two weeks.

“These loggers give very high-resolution information about shag locations via GPS and also about their dive depths, via in-built pressure sensors,” Isaksson said.

“We will therefore be able to study shag movement in the channel very closely and identify not only where they dive for food but also how deep.”

The researcher said that with the project having taken over two years to come to fruition, “when the first data came in, it brought a tear to my eye”.