Honestly? When you hear your (much-loved) local amateur drama group is putting on a stage version of a Miramax motion picture – which, incidentally, won the 2003 British Comedy Awards award for Best Comedy Film – you do wonder how that might work out.

Film is a whole different world. There are so many more opportunities – set changes and locations, music, actors…and for anyone who knows the film Calendar Girls, the actors are all British acting royalty…Helen Mirren, Julie Waters, Penelope Wilton…So, honestly? I did wonder how it might all work out when being performed at the Garrison Theatre in Lerwick.

Of course, Covid didn’t completely slow Islesburgh Drama Group down. The company has aired radio plays, filmed stage plays for streaming on YouTube and, more recently, produced a one-off performance for a live audience. But this is their first major production since The Crucible in November 2019. And what a welcome return it was.

The buzz around Calendar Girls was palpable before I even managed to see it on its closing night. You can just check your Facebook feeds for evidence of that.

On arrival, each seat in the theatre cradled a sunflower – a symbol of hope and a gift from the drama group. As the play unfolded, it became apparent how important a symbol that was.

Set in Yorkshire, the play – which charts the friendship of Annie (played by Jennie Atkinson) and Chris (played by Morag Mouat), local members of the WI – is an hilarious tale of a group of women who put together a calendar of nudes to raise money for a new settee at the local hospital waiting room.

The events that led to this venture are poignant, tragic and emotionally charged. Annie’s husband, John, dies of leukaemia and the women resolve to do what they can to raise the money they need.

The play opened to the singing of the well-known hymn Jerusalem, sung by Cora (Jacky Williamson). This, along with a rudimentary cross above an entrance stage left, anchors the setting in what seems to be the somewhat stuffy atmosphere of the local Women’s Institute meetings.

Before long, however, we are introduced to an array of sparkling female characters. From the flamboyant and edgy Celia (played by Mandy Phillips) to the nervous and timid Ruth (played by Donna-Marie Leask), they all offered us an insight into the world they inhabited as WI members who endured all manner of activities from tai chi, to talks about inane topics such as broccoli (which were taken inordinately seriously by some of the stuffier members of the WI!).

A good bit of the first half of the play focuses entirely on these relationships. The setting, a backdrop of Yorkshire hills and dales, was simple and effective.

In front of this was a stone wall, typical of the countryside in that neck of the woods. The inside and outside merged as a piano and tables and chairs occupied the same space as the wall with its makeshift stile and largely unchanging landscape. This didn’t matter. Because the play revolves more around the women –  their laughs, their loves, their heartaches – you soon lost sight of the set needing to do anything more than this. 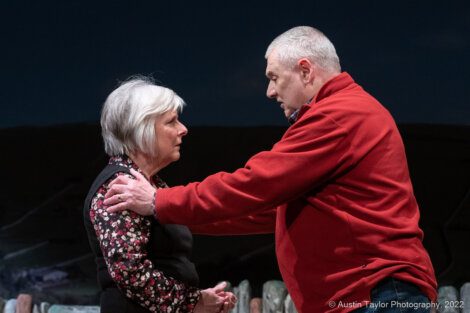 As the relationship between the women developed, we were introduced to John whose decline became more apparent as he got sicker and sicker, which in the end brought about the decision to make a calendar of nudes to raise money.

Usually focusing on landscapes such as bridges or church spires, the decision instead was to make a calendar where the women wore nothing and rather strategically placed themselves behind all manner of domestic items from tea pots to cakes.

You can imagine how the play suspends you between laughter and tears. As John passes away and Annie has to find a way to carry on, there was no doubt everyone would have been hit by the poignancy and the relevancy of loss and grief.

There are genuine laugh-out-loud moments  – not all of the character seemed to possess good social filters – and there were some softer and more difficult moments. Hilarity came in a number of guises.

The decision to shoot the calendar resulted in the enlisting of hospital porter and amateur photographer Lawrence – played by Martin Summers, who struck the perfect balance between being somewhat appalled, somewhat unsure of where to look and somewhat in awe of the boldness and spirit the women he was photographing seemed to possess. This was also handled humorously and cleverly.

A wooden board was brought out and seemed to obscure a good bit of the stage – painted white, there was something primitive and uninspiring about it at first. Clearly it was to mask the ‘nude’ women as they threw off their gowns to have their photographs taken. It seemed to be some sort of oversized photography backdrop. But what a stroke of genius it was.

Lawrence’s head, nervous and awkward, popped up over the top of it – comically waiting to take photos. And as the camera flash filled the room – a smart use of lighting to convey this effect- so did the backdrop become a projector screen for the woman behind it having her photo taken.

The audience got to see the photo that was ‘taken’ of them by Lawrence, in all its glory. What a hoot to watch! And, as it turns out, those same photos have become a calendar which was on sale in the interval.

Later on in the play, the same board was used to project a series of letters written to the WI after the publication of their calendar. One assumed that the letters were real, there was an authenticity to the way they were read by the women and projected, hand written, to the audience. 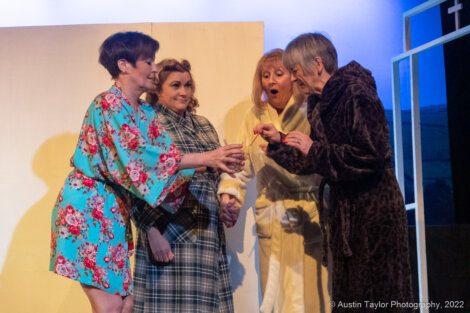 The Calendar Girls draw straws to choose who bares all first.

Letters from those who had been profoundly affected by the efforts the women had made. The efforts to move on, to find hope… If anything, this was for me the only thing I needed the play to linger on longer.

The poignancy of how the kindness of humanity can affect the hardest of human places was occasionally lost by the funnier responses some people had made to the calendar.

For me, the star of the show was widow, Annie. Played by Atkinson, diminutive yet fierce, she rises above her sadness to seek a greater thing from her loss. Atkinson’s comic timing was on point, while at the same time delivering a heartfelt performance.

It was through her performance that the true themes of the play became apparent. Friendships. Heartaches. The stuff of life – whether that stuff is hard, or hilarious.

So, honestly? I don’t have enough words to adequately applaud the cast, the directing, the production of this play.

It’s amateur dramatics at its funniest and finest. It’s the proof that, sure, film productions might have the big budgets, the award winning actors and every set change they ever want at their disposal, but the heartbeat of live, up close and personal local theatre still has the capacity to make you laugh, make you cry, and give you glimmers and glimpses of life and hope.

Next time you are scrolling through your news or phone, and you see this group selling theatre tickets, make sure you go. Honestly? You won’t regret it.

Calendar Girls, directed by Stephenie Pagulayan, was staged at the Garrison Theatre from Tuesday 29 March to Friday 1 April.

If you missed out on buying ‘Wir Charity Lasses’ charity calendar at the theatre and would like one, then you can express an interest in the calendar, using this link.

‘The truth didn’t really matter at all’