AS CAMPAIGNING in the Scottish Parliament election contest gets under way again after being suspended following the death of Prince Philip, all candidates including those vying for the list rather than the constituent vote are stepping up their game to get their message across to the voters.

However, in order to be able to vote people need to ensure they are registered to exercise this vital democratic right.

The local electoral registration office is reminding people not registered that they have until 19 April to do so via this website www.gov.uk/register-to-vote or by contacting the local office on 01595 745700 or email ero@shetland.gov.uk 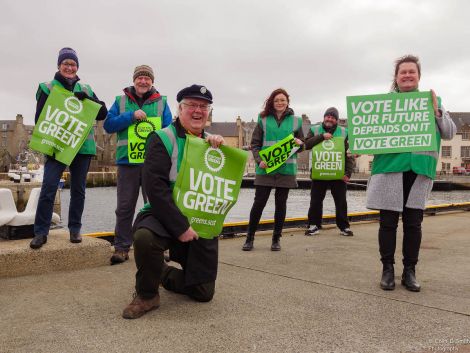 THE LOCAL Greens have expressed concern that two new Co-op supermarkets, planned for Sandwick and Scalloway, would threaten local shops and businesses as well as compromise resilience and food security.

The party’s Highlands and Islands list candidate Debra Nicolson said that progress in in developing a high quality sustainable food industry locally could be undermined if the proposals get the go ahead.

“More supermarkets would lead to vulnerability and dependence, and would represent a huge step backwards for Shetland,” she said.

The Green Party supports the development of a thriving circular economy, centred on local farmers, businesses and community enterprises (including local shops) that retain resources within Shetland and enhance the resilience of the islands’ economy and keep profits local, Nicolson said. 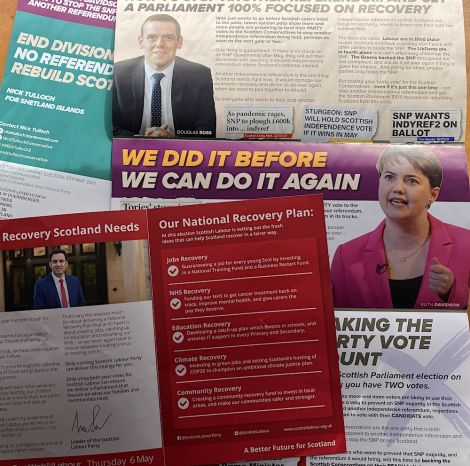 BRIAN Nugent, standing for Restore Scotland in Shetland as well as on the regional list, is challenging some of the larger parties on the quality of their election leaflets.

“There is a big selling job on Anas Sarwar, the relatively new leader of the Scottish Labour Party. The A4 folded leaflet has three photos of Anas, and some fairly bland content,” he said.

Nugent continued: “Leader Douglas Ross, of the Scottish Conservatives, is partnered by Ruth Davidson former leader, in a fairly belligerent A3 leaflet that does not mention a single Tory policy but talks exclusively about the SNP’s independence referendum.

“So with the Tories promoting SNP policy, what does Tom Wills go for in his chatty leaflet?  #BothVotesSNP is promoted, was that chosen before or after ALBA?

“Bizarrely, there is no mention of a referendum or independence or independence in Europe or the European Union. Each is a strange omission on its own, but each one omitted in an election leaflet?

“A party allegedly standing for a referendum on independence and a move into the EU, you have to think that the SNP do not want to scare the horses!” 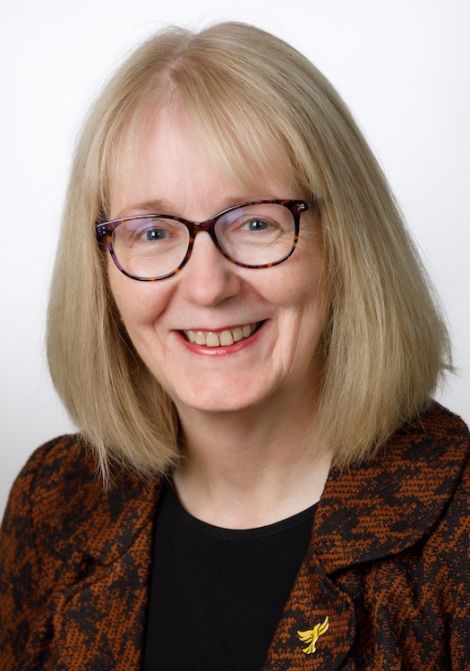 Communities have still not had any indication what restrictions will remain in place for Scottish islands when domestic travel restrictions are due to be lifted on 26 April.

Wishart wrote: “It is now almost a month since the easing of Covid-19 restrictions was announced for areas currently in Level 4 measures. No such indication has been provided for the islands of Shetland and Orkney which are in Level 3.

“People here are frustrated at the lack of clarity from the Scottish Government. There has been no signal, despite the ending of a consultation process two weeks ago, of the route that will lead to the easing of measures in the Northern Isles.

“As a consequence island businesses, unlike their counterparts on mainland Scotland, are unable to make plans for the weeks and months ahead, and this is impacting especially on those for whom logistical supply challenges already exist.

“I would be pleased to learn in early course when there will be an indication from government on the pathway for the Northern Isles out of current measures.” 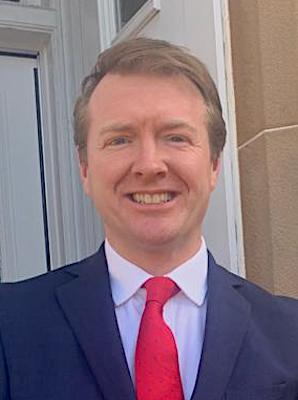 SCOTTISH Labour candidate for Shetland Martin Kerr has welcomed a commitment by his party to roll out home insulation, double glazing and boiler replacement.

In addition, Labour said it would provide grants and interest free loans of up to £18,000 for Scots to cover the cost of renovations, and to double the number of homes upgraded annually to 80,000.

The party would also guarantee free bus travel to under-25s and invest in interest-free government loans to help more low and middle income households to buy electric cars over the next two years.

Kerr said: “We need to acknowledge the climate threat and act now. The economic recovery can’t be at the expense of our environment. The two go hand in hand.

“Shetland has one of the highest rates of fuel poverty in Scotland and the number of people staying at home, working from home and home schooling here in the last year has only shown just how expensive it is to keep a house warm and the people inside it well-fed at the same time. We should not have to making a choice between heating and eating.

“If we can provide warmer homes and combine that with good broadband, it becomes more realistic to get people working from home more frequently. That then leads to fewer car journeys, less commuting and a greener economy.”

To find out more about all of the candidates standing in the election, including those on the regional Highlands and Islands list, visit our Scottish Parliament election 2021 page below. 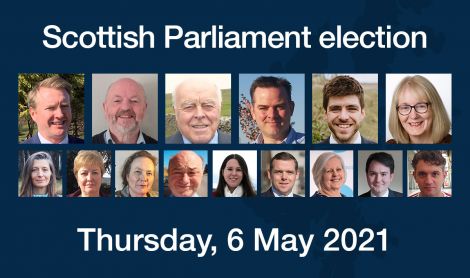