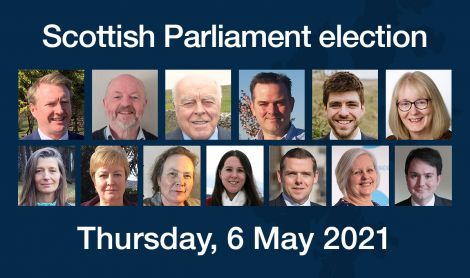 A NUMBER of local candidates contesting the forthcoming Scottish Parliament election have condemned comments made by independent candidate Peter Tait who is standing on the single issue of opposing same-sex marriage.

Tait’s candidacy became public knowledge on Wednesday after nominations for the election closed.

The former mussel farmer said he feels that same-sex marriage was alienating the country before God and that the nation never had been given an opportunity to oppose it.

Tait is reported to have also said that Covid may have been linked to same-sex marriage.

In the August 2019 by-election Tait stood on a ticket of reintroducing the Scottish monarchy to the UK – and he came last receiving just 31 votes.

SNP candidate Tom Wills said he was not sure whether Tait was serious or just an attention seeker.

He said he was somewhat reluctant to comment, as he did not want to give Tait’s remarks more oxygen than necessary.

Wills said: “I support everyone’s right to marry whoever they like. We can’t know for sure if Peter Tait is sincere or just seeking attention, but his views are out of place in the 21st Century.”

Scottish Labour candidate Martin Kerr added: “Same-sex marriage was passed by the Scottish Parliament back in 2014. Scottish Labour supports the rights of gay people to marry.

“Happily we have moved beyond any notion that gay people should be denied this basic right.”

Lib Dems candidate Beatrice Wishart added: “Love is love and gay marriage is not up for debate. These comments don’t belong in the 21stcentury.”

The other two constituency candidates Nick Tulloch (Conservatives) and Brian Nugent (Restore Scotland) were also contacted for comment but did not respond in time for publication.

Meanwhile the lead candidate for the Greens on the Highlands and Islands list Ariane Burgess said:”Many people will be appalled by Peter Tait’s views. This kind of outdated prejudice is exactly the sort of politics that we should be moving away from.

“Equal marriage was a major achievement, and has meant so much to couples across Shetland and beyond.

“In comparison Covid is a deadly virus that has caused heartache and misery to families all over the world. I urge Mr Tait to reconsider his comments and apologise for them.”

Tait said in response that he was neither an attention seeker nor would he consider apologising for his remarks, but added that he might have said things a “bit different” had he not been required to answer questions off the cuff on the phone.

Tait added that he had no policy proposals on any of the local issues that will be debated during the five weeks until the election on 6 May.