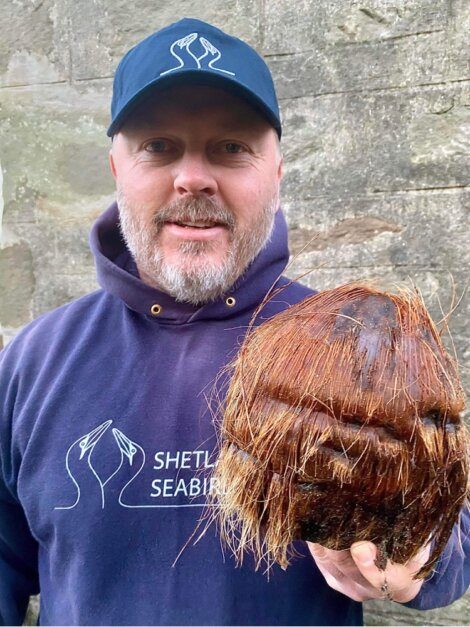 THE WINTER weather may be almost as far removed from the Caribbean as it gets, but one local beachcomber has dredged up a tropical discovery in the form of a coconut that ended a 4,000-mile journey by washing ashore at Spiggie.

Phil Harris of Shetland Seabird Tours made the surprise find at the remote South Mainland beach on Tuesday morning.

His partner and fellow tour guide Rebecca Nason said prolonged westerly gales had been “perfect for finding some delightful tideline debris” in the past few weeks.

“The coconut is a classic Caribbean find and hardly ever found,” Rebecca said, adding she was “not sure” how many similar discoveries there have previously been in Shetland.

A seasoned Orkney-based beachcombing expert, Martin Gray, said it was a “genuine vagrant” as it is still in its husk.

Among the other fruits of their recent beachcombing efforts was a water bottle covered in common goose barnacles that originated in Newfoundland, Canada, again found by Phil at Rerwick beach a few days ago.

Rebecca herself discovered “a wonderful mound of common goose barnacles attached to what I thought was a plastic bottle until I tried to lift it”.

It turned out to be a glass marine signal light made by Julian McDermott Corp, which had made its way across the Atlantic from Ridgewood, New York.

Phil and Rebecca spend a lot of time scouring Shetland’s beaches in winter to help with beached bird surveys, while birdwatching and “just beachcombing for fun” with their young daughter Ayda.

The couple have a wall cabinet for their collection of beach finds, including shark eggcases, glass, pottery, plastic green toy soldiers, shells and a couple of sea beans.

She described the latter as “the ultimate beach find” with two of the seeds likely to have travelled further than even the coconut – 6,000 miles or more – from the tropical Americas.

One was discovered at Gulberwick in 2020 and another at West Voe last month.

Rebecca added: “We like to collect our finds, but I think the coconut might have to be dried out and find pride of place in the unused fireplace for now!”

Medicinal cannabis seized in the post a first for police