ALLEGATIONS that a Shetland councillor had accused council officials of lying have been dismissed following an investigation by the Ethical Standards Commissioner.

Scott was also accused of shouting in the council chamber, continually talking over the chair of the meeting and making further allegations against council officials.

Following a four month investigation, these allegations have been thrown out by the investigating officer.

Scott described the period of investigation against him as a “worry” and said he felt “relieved” by the commissioner’s decision. As a consequence of the investigation Scott had resigned as chair of the licensing committee and board, as well as a member of the policy and resources committee.

“I always had faith in the trusty sword of free speech and the sturdy shield of truth to carry the day,” he added.

The dispute stems from remarks by Scott during a debate around a petition lodged by concerned islanders who questioned the SIC’s governance structures and in particular the extent of delegated powers used by council officials which, they said, left councillors regularly in the dark of what is going on in the local authority.

Speaking in support of a motion by vice-convener Cecil Smith to investigate the content of the petition a little further, Scott told the meeting of the full council that, at times, information he had received from council official had been “far from satisfactory” and on one occasion turned out to be a “lie”.

During his contribution Scott was interrupted several times by the meeting’s chair, convener Malcolm Bell, reprimanding him for allegedly accusing council officials of lying.

This was vehemently disputed by the Shetland central member, who was then ordered by the convener to switch off his microphone.

The exchange can again be witnessed in this clip taken from the council’s YouTube channel:

On Tuesday, Scott told Shetland News that he was delighted to be able to continue representing the people of the Shetland central ward.

“Many constituents have asked me if I feel I have been bullied, threatened or intimidated over the issue, but I just thanked them for their concern and said that I am a big boy now,” Scott said.

“Due to the confidential nature of the complaint, I can’t say too much about the detail, but I will say I was particularly offended by being accused of swearing in the council chamber on the 9 September 2020.

“This has been shown to be completely and utterly untrue, but whether or not there is a forthcoming apology, only time will tell. My poor old mother would have been horrified to hear that her son had sworn in such esteemed surroundings.

“All in all then, I am relieved that the issue has been resolved and this allows me to continue to strive against our neo-liberal politicians and their cuts in our public services.”

Responding to the ethical standards’ commissioner’s decision, Bell said that as council convener he will continue “to uphold the constitution and standing orders of the council”.

He said he could not directly comment on the detail of the investigation as, “any correspondence with the Ethical Standards Commissioner for Scotland is confidential and councillors are not permitted to disclose details of it in public”. 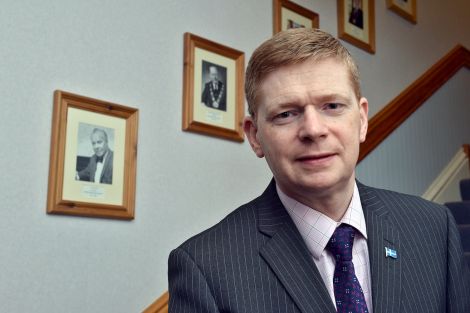 But Bell added: “Being a councillor is a privilege and carries with it responsibilities with regards to conduct.

“The Councillors Code of Conduct sets out the standards of behaviour expected from councillors in their dealings with staff, fellow members and the public. The code is an integral part of induction training for all councillors after they are elected.

“In particular, where councillors have a concern about the conduct of council employees there is a proper process to follow within our constitution in order to resolve the matter.”

The Commissioner for Ethical Standards in Public Life in Scotland oversees the conduct of those holding public office. The body is also tasked to encourage transparency in public life in Scotland.

The watchdog can investigate complaints against MSPs, local authority councillors or board members of public bodies. It also looks into how people are appointed to the boards of regulated public bodies.

The full council meeting of 9 September last year, which decided against looking into any of the issues raised by three petitions from constituents, can be watched again at this link: https://www.youtube.com/watch?v=cMIaGe1REuw