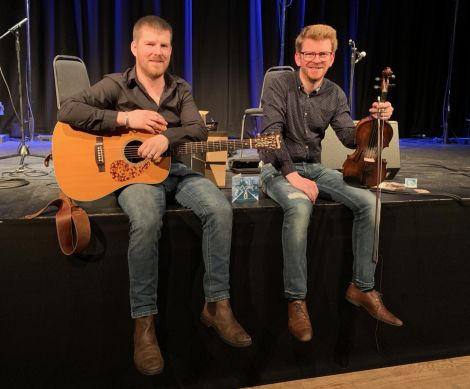 Ryan and Ross Couper were “buzzing” after performing in front of a live audience for the first time in what feels like forever. Photo: Neil Riddell/Shetland News.

“HOW cool is this?” beamed Ross Couper as he and brother Ryan took to the Mareel stage on Saturday lunchtime.

Midway through Shetland’s first proper-gig-with-a-crowd since March he spoke of it being “such a buzz” to play live again, though it’s fair to say the brothers’ demeanour had already given that away.

Their hour-long set, marking the release of their duo album An Den Dey Made Tae would be a highlight of the local musical calendar in any year. But so much more so in this context – the first experience of a concert setting in nine months for Shetland performers and audience alike.

Meantime the 50-strong, socially-distanced audience naturally leaves the 300-capacity auditorium feeling on the empty side. But it really mattered not: starved of live performance for so long, those present easily made enough noise for double their number.

There was an easy warmth of atmosphere between stage and audience, while many more were able to join via a live online stream. 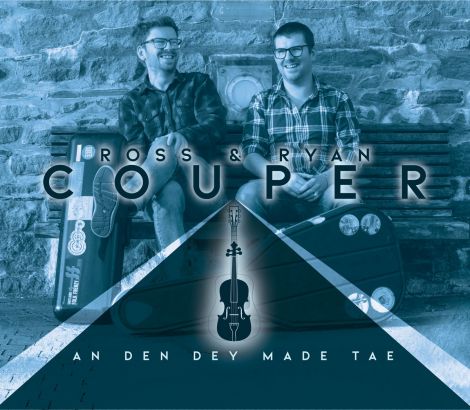 The artwork for An Den Dey Made Tae.

Those included members of the Couper clan, and this was a hugely proud day for the family. While, as a touring musician, Ross has seen his income decimated in 2020, one positive by-product of the pandemic is that it freed up the time for he and Ryan to record together.

The resulting 13-track album and accompany gig are everything you would want from the Couper brothers. And without downplaying the sheer technical accomplishment on display, this is not music that needs over-analysing.

They have come up with a brilliant selection of tunes, several of which are self-penned. Others are drawn from sources close to home (including father Alec Couper and mother Margaret Robertson) and farther afield (Billy Joel, Mike McGoldrick).

Each one is played with the sort of gusto and precision you’d expect from this exceptionally talented musical family. They are tunes that get the feet tapping and the mind relaxing. Post-pandemic, they will surely provide the soundtrack to memorable late nights at Islesburgh and other peerie venues around Shetland.

Ross is most renowned for firebrand, quickfire fiddle salvos. Such moments were present and correct, with strands of horsehairs fraying off his bow during the frenzied climax to McGoldrick’s Free Falling early in the set. The duo’s flourishes during Alec’s archetypal good-going Shetland number Da Sixty Fathom Reel resembled a freight train that never fully runs away.

But a few minutes later they were expertly delivering a stately waltz written by good friend Chris Stout – demonstrating they are equally adroit operating at a slower tempo.

Ryan is not exactly a slouch on his Blueridge guitar either.  He provided arguably the afternoon’s most emotionally affecting moment with Jessi, an incredibly bonny finger-picked gem written for his daughter that would bring a tear to the proverbial glass eye. 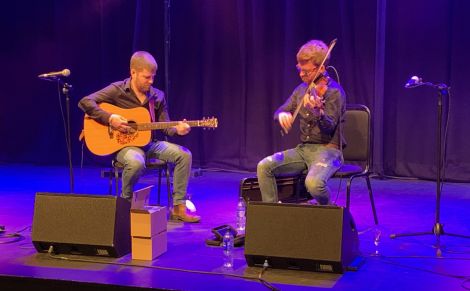 Their plaintive reading of And So It Goes draws its melody from guitar virtuoso Tommy Emmanuel’s reimagining of Joel’s pop song. Again it was hard not to be struck by the sheer quality of the more moderate-paced material.

Ross is much the chattier of the two on stage, good-naturedly teasing Ryan after he forgot the name of one tune “it’s named for wir nephew… at least du minds the chords, dat’s the main thing”.

According to the elder sibling the only fly in the ointment was his own wardrobe malfunction, which he attributed to his failure to sufficiently unfurl a new pair of jeans prior to purchase, though to be honest they seemed fine!

Musically the brothers complemented one another beautifully throughout, serving to create what – after the year we’ve all had – was an utterly blissful hour of feel-good respite. Fingers crossed there’ll be many more occasions like this in 2021.

Having paid gracious thanks to the audience for keeping music going “in the midst of all this madness”, the two Rs left us with an uproarious staple of their live repertoire, Tom and Jerry, earning themselves a richly deserved standing ovation.

‘The truth didn’t really matter at all’