THE LIKELIHOOD of two mooted cruise ship visits to Lerwick going ahead this summer is uncertain amid Covid-19 restrictions – but if passengers are allowed ashore it will be in a “highly regulated” fashion, according to tourism industry leaders.

There has been a mixed reaction within the isles since it emerged last week that Fred Olsen had begun selling spaces on its Touring Scenic Orkney and Shetland trip, slated for stop-offs in Lerwick on 25 July and 26 August. Its ships have capacity for around 1,300 passengers and the company says the trips are available to UK residents only.

The news has been generally well received in local business circles, but there is trepidation too among some in the community after a year in which Covid-19 restrictions have meant residents have not been able to enjoy anything like a normal life.

Virtually the entire cruise ship season was wiped out last year – a vessel last visited on 13 March 2020 – and despite the highly successful UK vaccine rollout many are privately resigned that there is likely to be little, if any, activity before 2022. 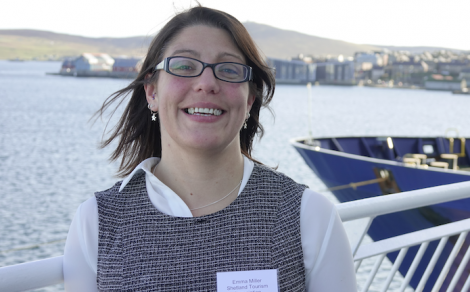 Shetland Tourism Association chairwoman Emma Miller said she thought “a little bit of apprehension” was to be expected in most communities, and at present there is “too much uncertainty” to know what the summer might hold.

“At this stage nobody knows for sure whether we are going to see cruise ships, and if we do it’s not going to be in the way we know,” she said.

Miller said it was possible ships would “come and sit in the harbour and wave at us”. If passengers are allowed ashore this summer “it’s going to be highly regulated” and not a case of “the ship docking and people pouring off”.

Shetland Islands Council’s environment and transport committee chairman Ryan Thomson said a decision on whether to allow cruise ships into ports later this year was one that needed to be made “with proper dialogue not only with the local authority, but also the local NHS and partnerships”.

“I have every sympathy with the tourism sector, among many others, and the crystal ball they currently require,” he said.

“While we need to see industries opening up at some point, it is essential now we have come so far that it only does so once it is safe.

“Any form of commercial activity opening up must adhere to government guidance. With different countries operating to different rules, and a third wave appearing to be hitting some European countries, it is imperative that the first priority is people’s safety.”

Caution is very much the watchword for VisitScotland, which has just launched a four-week campaign aimed at encouraging inter-Scotland travel this summer. 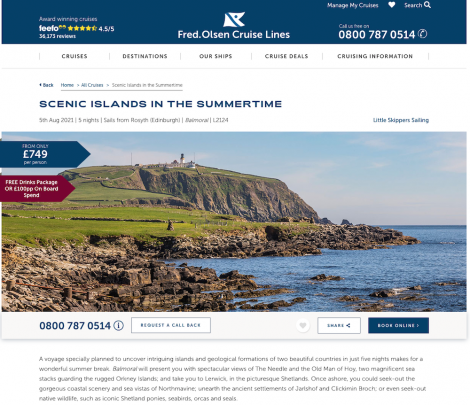 The tourism body’s Shetland manager Steve Mathieson said the cruise ship industry would be “having some close conversations in terms of how Shetland will open up” to visiting vessels.

“If it is this year it will be small-scale compared to previous years,” he said. “You could compare it to dipping a toe in the water in some respects. Those conversations with industry and with the community have not happened yet.”

Mathieson said that, as far as he was aware, only two cruises currently have designs on taking passengers ashore. Fred Olsen and P&O Ferries are both working on “blue water cruises” around the Northern Isles that do not make any port calls.

“Any calls that are being discussed at the moment, the only people who would come ashore would be on organised coach trips and the like, so there wouldn’t be any independent cruise ship passengers coming ashore and wandering around Lerwick or anywhere else,” he added.

“I believe it would all be very highly regulated, and part of the discussions are to work out how that would actually happen… in terms of commercial viability, as well as being very aware of mitigating any risks to the community.”

In response to a query from Shetland News, Fred Olsen managing director Peter Deer said the company was “very much looking forward to a return to cruise”.

“We have a good and long-spanning relationship with the port authorities for the Orkney and Shetland islands and have worked very closely with them, who in turn have worked closely with the local councils, on the development of our Welcome Back programme, which includes both scenic-only, no port sailings and, if government guidelines allow, later into July some calls into Kirkwall and Lerwick.”

Last week Fred Olsen said it is awaiting for further guidance before imposing any possible vaccine requirements on passengers, although it did say that testing will be required for guests and crew.

“By the time we resume sailing we know that a large proportion of UK adults will have received their vaccinations,” Deer said. “We will also have a number of other measures, to protect the health and wellbeing of our guests and crew aboard our ships, and those who live in the destinations we visit.”

He added the measures had been developed as part of a wider framework with the industry and approved by the government: “We will, of course, adhere to the latest guidance from all of our destinations at the time of sailing and will provide our guests with guidance on the local measures before they go ashore.”

Lerwick Port Authority’s cruise manager Melanie Henderson reiterated that the organisation would be guided by public health guidelines and parameters set by the government, and she was encouraged by the level of demand for vessels to make stops in Shetland whenever travel is able to resume.

“There is appetite for cruise ships to return, Shetland has a really good reputation built up over years of successful cruise calls and we’re working to ensure that when travel does open up again we can do that as safely as possible,” she said.