LIVE music was among the first things to go and the last to return during the pandemic, so to describe Shetland Folk Festival’s re-emergence as welcome would be an understatement, writes Neil Riddell.

The excitement and relief in committee host Lisa Johnson’s voice was palpable as she welcomed everyone to a packed Cunningsburgh Hall on Thursday night. When the 2019 festival concluded, who could have foreseen the interlude before the next one lasting almost 1,100 days?

Everything felt reassuringly normal. Organisers, sound techs, hall volunteers, musicians, audience members – we could all mostly remember how to do this.

Cunningsburgh was among the first concerts to sell out, and when the number of local musicians in the audience is too many to count you know you’re in the right place.

The four acts boasted 18 musicians, a miscellany of mostly stringed instruments and a smorgasbord of influences from both sides of the Atlantic. Even in this year’s slightly truncated format this is a festival that always delivers, and then some. 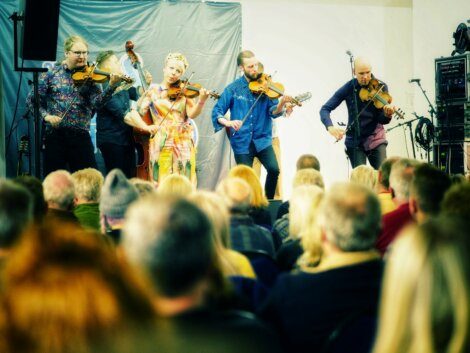 First up were Vair. The local four-piece have been busy with newborns, weddings and pets since 2020, but a 40-minute set of mostly new material showed they still found time to get creative.

The band eased into their stride with a mellow, rhythmic take on Innes Watson tune Do Da. Lewie Peterson touchingly dedicated The Stubborn Mule to its late composer, Koady Chaisson of The East Pointers, taken much too young at the start of 2022. Its upbeat, foot-tapping finale drew the first loud whoops from the music-starved masses.

One of few traditional Shetland acts not to feature a fiddler, Vair invited Kevin Henderson on stage to momentarily remedy that. They played a commissioned tune titled Reel Pandemic with the good-humoured Norway-based fiddler imploring the audience to “rename it… or even rewrite it!”

He was about to be upstaged. Rhythm guitarist Jonny Polson’s young son Ollie decided an additional special guest was required, nestling alongside his dad to much hilarity on and off stage as the band tore through Warren Zevon’s evergreen Roland the Headless Thompson Gunner.

Celebrating 20 years as a band, albeit two years after the event, the seven-piece were as sharply drilled as they were sharply dressed. There was a cinematic sweep to much of their set, including the hypnotic melody of Keidas (Oasis) and its wordless vocal coda.

It is complex but never overcomplicated music, and the audience lapped up every swoop, dive, jump, sway, footstomp … and even the odd exaggerated guitar pose. The voluminous appreciation shown was no less than this intoxicating and immensely likeable collective deserved.

Next up was undoubtedly a star of Shetland’s traditional music scene in the making. George Spence (son of esteemed fiddler and composer Steven Spence) is still in his teens but is already a hugely skilled musician.

He plays with expressive style and grace whether tackling a slow air, a hornpipe or a set of reels, enhanced on this occasion by simpatico accompaniment from pianist Hamish Napier.

You’d be tempted to say Spence has a nonchalance about him, were it not that he seems genuinely unaware of his sheer talent.

And judging by Skuda, a gorgeous slow air penned in memory of former AHS teacher Geordie Jamieson, he has inherited some of his old man’s compositional ability too. 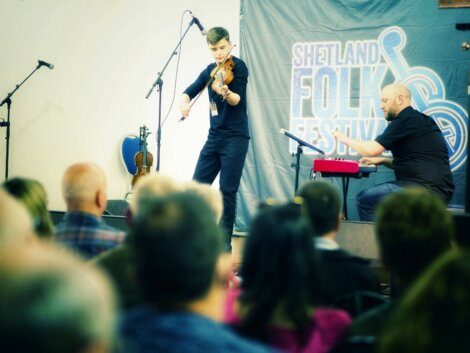 Closing out the night were Grammy-nominated Americana quartet Della Mae. Normally a quintet, the all-female group are currently without lead singer Celia Woodsmith.

Hopefully she will rejoin her bandmates on Saturday, not least so a song she wrote early in the pandemic featuring the lyric “I’ve never been to Shetland” doesn’t become a self-fulfilling prophecy.

They whipped together a set drawn from the American roots canon. Numbers from Roger Miller and Patsy Cline featured alongside inventive string band renditions of Neil Young classic Ohio and Lone Pine Hill, the late Justin Townes Earle’s affecting song about a disillusioned Confederate soldier in the dog days of the American Civil war.

There was virtuosity aplenty as they tackled sprightly Vivian Williams instrumental Chicken Under the Washtub and the catchy roots-pop of Pine Tree complete with a superb three-part a cappella harmony.

It is testament to the quality of programming that, following a concert where the closing act were shorn of their singer, I doubt a single person left feeling short-changed.

Della Mae guitarist Avril Smith said it felt great not only to be back playing but also to hear all the other musicians doing their thing: “It gives us life,” she said, and we all agreed.