THE MANAGER of Shetland Foodbank has thanked the community for its “tremendous” support throughout 2021 – but voiced fears that demand for food parcels is likely to increase next year as rising fuel prices and the wider cost of living crisis continue to bite.

David Grieve said the food bank had the generosity of countless local businesses, individuals and volunteers to thank for ensuring it is well equipped to provide for those struggling the most.

After distributing 920 parcels in 2020 it has handed out 850 parcels in 2021 to date, with demand slightly lower in the middle of the year before spiking in October after the UK Government’s much-criticised decision to remove the £20-a-week uplift to Universal Credit.

“We started seeing clients again that we hadn’t seen for a long period of time, a couple of years probably,” Grieve said. “They’ve started coming back to us, but we’re also seeing new customers, clients that we’ve never had before, a lot of whom have got jobs.

“It’s a cost of living thing, particularly things like electricity bills going up, and the cost of food has gone up significantly in the last couple of months as well.”

The removal of the energy price cap in spring is “going to lead to more demand for us, without a doubt”, he added.

Shetland Foodbank is in the fortunate position of receiving plentiful donations of both goods and cash to ensure it can keep up with fluctuating demand.

“The support over the Christmas period has been tremendous,” Grieve told Shetland News. “We want to say a massive thank you to the community and local individuals and businesses for the support that they give us – it just comes from everywhere.

“We always have our monthly list [of essentials] but anything we’re short of we just go and buy it because we have got funds, that’s the good thing.”

During the height of the Covid-19 pandemic there have been times when volunteers were separated into different work bubbles, but the food bank has largely been able to continue operating as normal.

One significant thing that has been lost, however, is the ability to sit down and share a cup of tea with clients when they come in for a food parcel.

“That’s something we always used to do – not every client did but sometimes they would come and have a cup of tea and talk about their issues, and we could more easily refer them on to support from someone else,” Grieve said.

“We still do our best to point them in the right direction, it’s just that lack of the friendly welcome, come in and have a cuppa…”

In the new year the service, based at Lerwick’s St Magnus Street, will take on responsibility for supplying food parcels to be delivered directly to homes around the island by those serving community payback orders through Shetland Islands Council’s criminal justice team.

That service initially sprang up thanks to government pandemic funding and food supplies from FareShare network and has been administered through the council’s Anchor team, which aims to support families and prevent them falling into crisis situations.

Council catering team leader Neil Beattie praised the input of Anchor staff including Lynsey Hall and Sandra Summers, along with Julie Halcrow from the criminal justice team, for their input to a service that last month helped 87 families including 150 children. 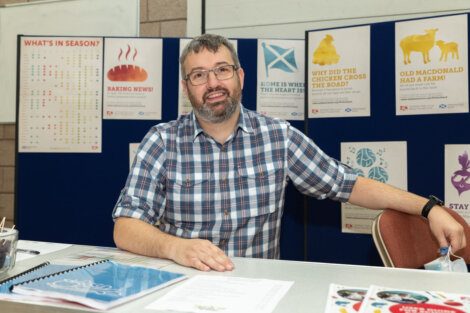 Initially food was being delivered through the Hame Fae Hame nursery in Scalloway, whose owner Kaye Sandison contacted Beattie to say she was aware of families in need of help, and began gathering supplies for collection from the nursery.

Now the service is primarily delivered directly to people’s homes, which enables support to be provided to anyone reluctant to attend a food bank in person.

“We’ve got a new system now where David and the food bank guys are going to pack up the parcels, our admin and catering are going to keep taking phone calls, and criminal justice is going to continue delivering it,” Beattie said.

“Lynsey and Sandra will be in touch with the families, and we’ll be doing a lot of signposting to ensure they’re all getting the help they’re entitled to.”

Beattie said that among the first families they were able to help during the early days of the Covid-19 pandemic several said they “would never go to the food bank – I don’t know if it’s stigma or just that sometimes people don’t realise how much trouble they’re in until the help is given to them”.

He said being able to deliver parcels to more remote parts of Shetland was essential because the food bank primarily serves Lerwick and its surrounding area. Even if families can access public transport, it is logistically difficult to carry large volumes of groceries and supplies on the bus.

Beattie pointed to a plethora of cost-of-living challenges including fuel prices and food, with bread prices in particular rising steeply, along with Covid, logistics resulting from a shortage of HGV drivers, increased packaging costs and a decrease in the availability of labour.

“It doesn’t paint a rosy picture – the prices will go up, undoubtedly,” he said.

Beattie paid tribute to the “great job” done by Grieve and his team at the food bank, adding everybody involved within the council had “gone above and beyond what’s required of their normal job” too.

“When you see people in need it’s humbling and you think ‘what can I do to help?’” he said. “It’s sad work, but it’s definitely rewarding as well.”