PLANS are afoot for a butcher’s shop to open in the south end of Lerwick, which would lead to the creation of more jobs.

The team behind Sound Service Station launched a meat production facility at Rudda Park earlier this year, and demand has meant plans for a butcher’s shop in the building are being accelerated. 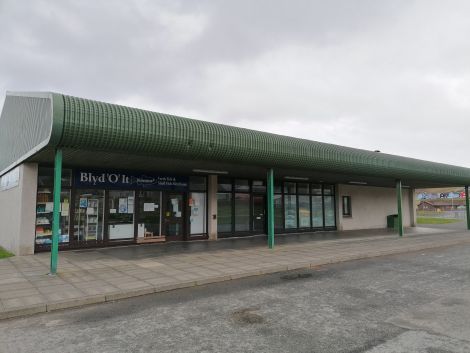 The Rudda Park retail unit in Lerwick. The meat production already takes place in the section on the right, and the shop is planned for there too. Photo: Shetland News

Owner Jordan Thomason said the meat side of the business has tripled its workforce from thee to nine in just three months.

If the shop proposal receives the go-ahead from Shetland Islands Council planners, then a few more staff will be recruited too.

Thomason said the idea for a butcher’s shop has “always been in our plans”.

“We didn’t think we would do it as fast as we’re hoping to do it,” he explained.

“We left a specific space at Rudda here for that. But we wanted to make sure that it worked, that people liked the product, and if they did, that we embed it in the market first before we open up the butcher’s shop.”

“The facility here will probably have a dozen people [working] in it sooner rather than later.”

The only butcher premises people can visit just now in Lerwick is the Scalloway Meat Company counter at the Toll Clock Shopping Centre.

He said the company aims to “change the game a little bit” when it comes to its meat products.

It was previously reported that the business would begin create Scotland’s first lamb biltong.

The company are also making pies, rolls and sandwiches.

The change of use planning application for the Rudda Park premises, which is located next to the Blydoit fish shop, will go in front of members of Lerwick Community Council tonight (Monday).

Thomason is confident the plans will benefit the Lerwick community and beyond. “It’s a local company supporting local farmers and produce, and it’s something this side of town hasn’t had,” he said.