LOCAL people have been advised to be mindful of others in the community and do things “the old fashioned way” by looking out for vulnerable family members and neighbours who may need extra assistance or help while telephone and internet communication links are disrupted.

Telecommunication links between Shetland and the Scottish mainland were damaged overnight to Thursday. Some reports suggest the cable has been dredged up but this has so far not been confirmed officially.

First minister Nicola Sturgeon said it was a “very serious situation” and said the Scottish Government’s resilience committee is working with partner agencies.

Speaking at a face-to-face press conference in Lerwick Town Hall acting police inspector Bruce Peebles appealed to people to look after each other.

While most telephone services are down and neither the local authority nor NHS Shetland can be contacted using the usual numbers, services do continue, and people are advised to call 01595 696434 if they need to contact either the council or the health board urgently.

Meanwhile, Lerwick Police Station will be open and manned 24/7 and extra police officers are due to arrive off the ferry on Friday to act as contact points for the population.

Officers had a presence at the Tesco supermarket all day on Thursday to advise on the ongoing situation.

The 999 emergency number is not affected by the outage, but should people have the need to speak to the police outside of an emergency they could do so by calling along the station or, alternatively, contact any other of the emergency services who would relay messages. 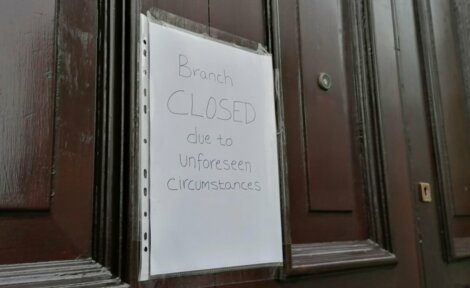 A sign outside the Bank of Scotland on Thursday morning. Cash machines were also out of action. Photo: Shetland News

Meanwhile, NHS Shetland also said it was confident it can continue services more or less uninterrupted despite the organisation’s telephone network and internet services not working.

The health board’s Kathleen Carolan said: “If you have a planned out-patient appointment, treatments such as chemotherapy, tests in the medical imaging department or a planned procedure – please attend for your appointment as planned and will decide on a case by case base if we can proceed with your appointment.”

Meanwhile, Shetland Islands Council has been able to restore some of its internet services, including Teams, by making available some bandwidth via Shetland Telecom, the council owned provider using the Faroese Shefa cable.