AROUND 60 people took part in a socially distanced walk around Clickimin Loch on Saturday morning to raise awareness of gender-based violence.

BEE volunteer Ellie Ratter said it had been a “really good turnout and we’re really happy” both at the number of people who took part and the opportunity to engage with others in the community.

The volunteers set up a stall along the main road and also installed an exhibition highlighting facts related to gender-based violence along the walk route, which will remain on display until 10 December.

BEE had #WisToo facemasks printed and are encouraging people to take selfies while wearing the masks to help amplify the online awareness-raising effort. 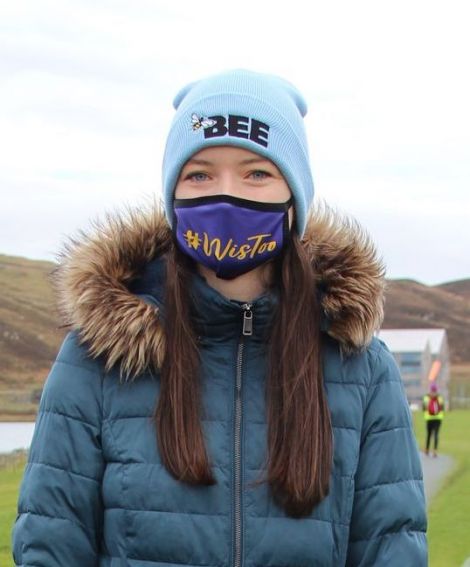 “It’s been very positive on social media with lots of people sharing it, and there were quite a few people out walking their dogs and we explained what we were doing,” Ellie told Shetland News afterwards.

“I think it’s really important to speak about at the moment, so survivors – when they speak out – don’t feel like their story is diminished, that they’re actually listened to.”

In such a small community many people might say a given individual “would never do that [commit an act of gender-based violence]” and try to invalidate a victim’s story “but they don’t know [the person] on that level”.

Shetland Rape Crisis trustee Jane Moncrieff said it was “good to see so many folk of all ages and genders out taking part in the walk around Clickimin this morning”. 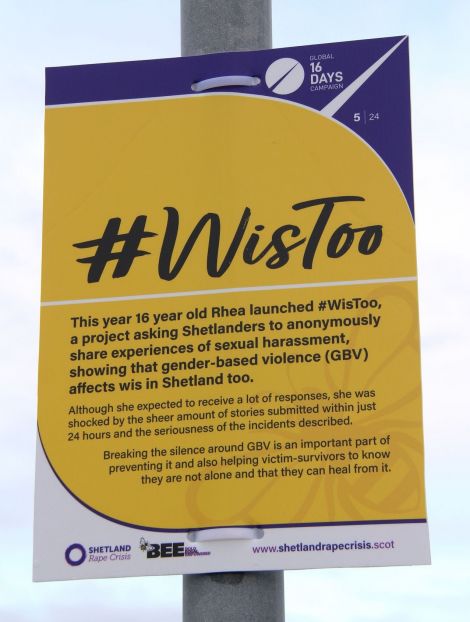 The event formed part of the global 16 Days of ‘Activism Against Gender-Based Violence’.

“The posters on the route highlighted the appalling statistics and this well-organised event should be applauded for bringing what’s often a hidden issue into the light,” she said. “Not a comfortable or easy task in a peerie community.”

Shetland Rape Crisis says gender-based violence – acts perpetrated against a person’s will and rooted in rigid gender norms – can take the form of physical, emotional, psychological or sexual abuse, and inflicts harm on people of all genders.

Ellie said she would urge anyone who has been the subject of such mistreatment to find someone to talk to. Options available include contacting Shetland Rape Crisis, Women’s Aid and other helplines, or speaking to a family member or close friend.

Following a ground-breaking piece of work from fellow BEE member Rhea, the group settled on the #WisToo hashtag to mirror the #MeToo movement that has sprung up globally in the past three years.

Ellie said Rhea’s work had a considerable impact within the local community in beginning to remove the stigma attached to speaking out.

“I think [folk] were quite shocked with #WisToo, there was quite a lot in that that got people’s attention. A lot of people think that’s something that doesn’t happen up here, but it happens everywhere.”

While many elements of gender-based violent behaviour “have been tolerated in the past”, Ellie feels there is “a lot more education about it now – it isn’t something that we have to live with, it’s something that we can do something about”. 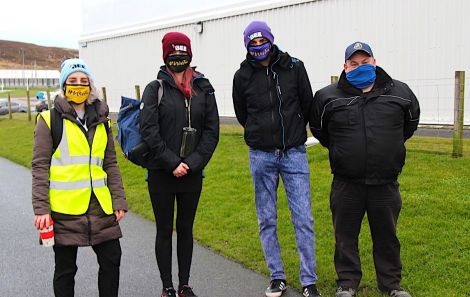 She was particularly pleased that some SIC councillors came out to support the walk, and added it was important that men were viewed as “part of the solution as well”.

Shetland Rape Crisis manager Lisa Ward said the issue was “pervasive in all societies, including our own”.

“The #MeToo movement was and is a huge step towards changing attitudes around these behaviours, but at times may have felt a bit removed from wis here in Shetland,” she said.

“But this is a problem here too, and Rhea showed this earlier this year with her #WisToo project, and this is what the BEE volunteers wanted to highlight today.”

Funding secured to replace sails on the Swan