COUNCIL officials involved in plans for a Shetland ‘energy hub’ have welcomed a pledge from the Scottish Government to invest £100 million in the hydrogen sector over the next five years.

Shetland Islands Council’s infrastructure director John Smith said the team behind the project will be “looking into the detail of this announcement to ensure Shetland can take advantage of any funding that may be available”.

The Scottish Government announced on Monday that it aims to make Scotland a “leading hydrogen nation”, with an ambition to generate 5GW of renewable and low-carbon hydrogen by 2030.

This would be enough to power the equivalent of 1.8 million homes, the government said. 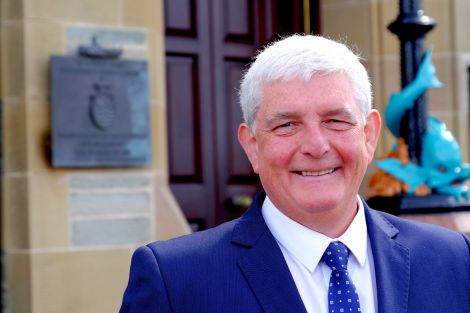 Hydrogen, which emits no carbon dioxide, can be used as an alternative to natural gas to transfer and store energy, and it could replace fossil fuels in industrial processes, internal combustion engines and homes.

It is a key part of the ORION project, formerly named the Shetland Energy Hub, which aims to secure a “clean, sustainable energy future for Shetland and the UK”.

It is being led by Shetland Islands Council and the Aberdeen-based Oil and Gas Technology Centre.

Part of the ambitious project is a proposal to generate hydrogen, particularly from wind power, and £5 million of government funding has already been sought to develop local production.

“The Shetland clean energy project is an important component of the Islands Deal currently under development, and we’re actively working on how we can maximise the benefits for Shetland.”

An ‘opportunity assessment’ released by the Scottish Government on producing ‘green’ hydrogen from offshore wind said Sullom Voe Terminal is “uniquely well-positioned to enable the development of the most extreme northerly of Scotland’s offshore wind resources”.

“Whilst relatively isolated from existing UK hydrocarbon pipeline network, it is close to existing Norwegian pipeline infrastructure which may provide alternative hydrogen export routes towards northern Europe,” it adds.

“The extensive terminal could also be used for direct refuelling of hydrogen-powered ships.”

There is also a suggestion that the fourth jetty at Sullom Voe could be suitable for ammonia export.

An area to the east of Shetland is one of many sites in the waters off Scotland which have been pinpointed as locations for possible offshore wind development.

More than 95 per cent of global hydrogen supply is currently produced from fossil fuels, and with national emissions targets in place, there is said to be an opportunity for zero-carbon hydrogen produced by large-scale electrolyser systems.

The government says Scotland has “in abundance all the raw ingredients necessary for the production of low-cost, clean hydrogen”.

Scottish energy minister Paul Wheelhouse said: “We are the first country in the UK to publish a hydrogen policy statement that sets out how we can make the most of Scotland’s massive potential in this new sector.

“Hydrogen is rapidly emerging across the international community as a sustainable solution for the decarbonisation of the economy and a key element of the energy transition picture.”

Director of energy and low carbon Audrey MacIver said: “The development of a strong hydrogen economy could create economic benefits for businesses, communities and our workforce.

“Many businesses could also benefit from switching to hydrogen use for their production, which would contribute to the transition to a carbon neutral economy.”