AN EVENT is being held in the Scottish Borders next month in a bid to “turn around the fortunes” of endangered Fair Isle and Orkney chairs.

Both of these traditional styles are currently on the Heritage Crafts Association Red List of endangered crafts.

Eve Eunson, who is said to be only one of two people who still make Fair Isle chairs, will appear at the event at Marchmont House near Greenlaw over the weekend of 2-4 September. 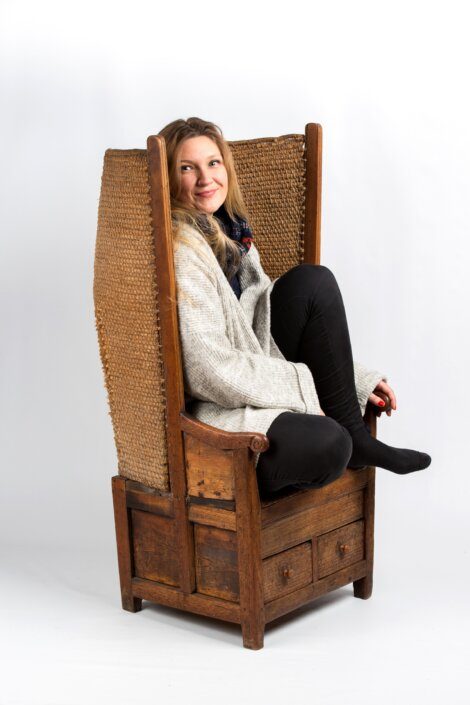 Eve Eunson sitting in a Fair Isle strawback chair made around 1878.

The hope is that the event will raise interest in Fair Isle and Orkney chairs.

Eunson, who works as an architect, learned how to make Fair Isle chairs in part because she wanted to work with wood, and because of her own roots.

“I grew up on Fair Isle and have very fond memories of the people and the culture,” she said.

“I can remember well, as a small child sitting on my, great uncle’s knee on these chairs and being told stories about shipwrecks and about the history of the island and of the furniture.

“So that was something that I was very connected to.”

Eunson said the chairmaking tradition emerged from both need and a desire for creative expression: “They were made by the island’s men out of necessity. There was no other option for getting yourself something to sit on.

“Fair Isle is famous for things like its knitting, its female crafts. But these chairs were an artistic outlet for the men, who were spending their winters making some really special things.

“There’s obviously a lot of love and care that went into making the chairs and while some were quite utilitarian, others were particularly nice with a lot of attention to detail and decoration.”

Also at the event will be Orkney chair maker Kevin Gauld.  The weekend includes talks, Q&As and demonstrations of the straw techniques.

Heritage Crafts Association’s endangered crafts manager Mary Lewis said: “These crafts are centuries old and as much a part of our cultural heritage as much as a museum or an art gallery or ancient monument.

“The difference is that they are intangible skills, it’s intangible heritage, contained within people. If we lose those skills that are within us, then we lose a little bit of our cultural heritage. And once you lose them, they’re quite difficult to recover.

“There are just two remaining makers of Fair Isle chairs, so they are critically endangered. There are more makers of Orkney chairs but still very few, so they’re an endangered craft. In both cases there’s a risk that the skills won’t be passed on to the next generation.”