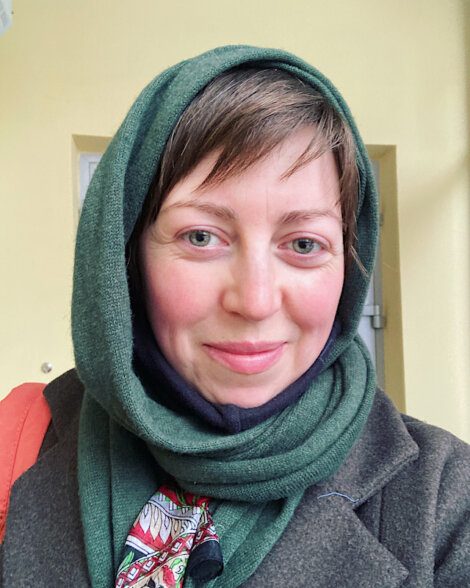 I GOT unreasonably angry at the weather this week. It should be warming up, here on the Black Sea, we should be enjoying that wonderful glimmer of spring in the air – and yes, long-awaited crocuses bloom, but they are covered in snow.

At the ferry crossing on the Danube where I’ve spent the last nine days, the northerly wind has been vicious. Refugees from the Ukrainian side of the river huddle together on the deck of the ferry, which is a sort of open barge, no shelter at all as they cross the choppy river, these women with tiny babies wrapped in coats and blankets, these 90-year-old men leaning on sticks. Toddlers, teenagers. There are so many children.

The other day it just snowed and snowed, the wind blowing it horizontal, and I kicked the metal fencepost in a rage at this vindictive weather (and hurt my toe). Likely doesn’t take a psychologist to suggest that I was angry at more than the weather. There is so much to be angry at, I don’t know where you begin.

I’ve heard so many stories this past week, of shelling and rockets, of walls shaking and sirens wailing all night, of last-minute decisions to pack. I’ve interviewed women waiting in the queue for border control who are so obviously trying not to cry in front of their small children, and who insist they’re going back home soon, and I don’t know what the hell to say to them. 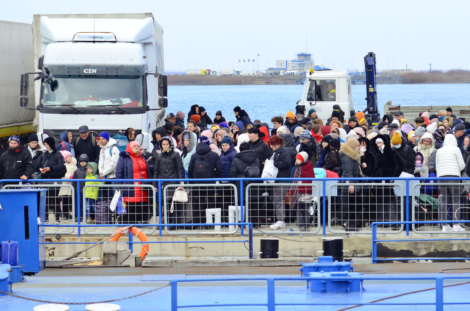 Refugees from the Ukrainian side of the Danube on the deck of the ferry, which is a sort of open barge.

Generally people do want to talk, to describe what’s happened to them, describe their happy lives before this war (that’s the phrase they all use), and to rail against the senselessness of this inhuman invasion. Sometimes I just put my kit away and try to be more immediately useful, fetching tea or translating, asking about transport, just being a listening ear.

I’ve talked to a lot of people about our favourite places in Ukraine – mine are the grand central square of Kharkiv, recently bombed but still there, and the steep, winding Andriyivskiy Spusk in beautiful Kyiv. My favourite Odessan women – who, by the time you read this, will hopefully be on their way to Berlin – told me all about their grand and bustling port city, somewhere I’ve always wanted to visit. 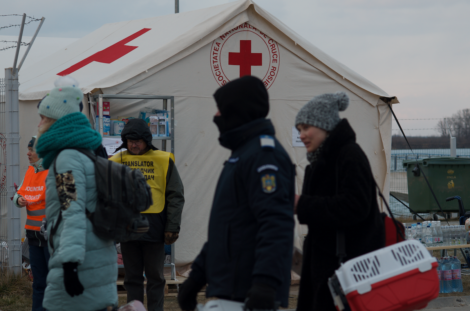 Refugees are welcomed by volunteers from the Romanian Red Cross.

The food, the markets, many nationalities and cultures converging. Odessan women, you notice at this border point, are often very fashionable. Parisian, really. I am a total scruff next to them, in the jeans I’ve had on for nearly a fortnight and my big shapeless jacket frayed at the cuffs. But I’m warm, ish, which is all that counts in this damned weather.

Anger is also a good proxy for fear – it’s easier, punchier – and I know my stomach twists with fear with every news alert that mentions the parts of Ukraine where my friends are. I can’t shift the idea that the Russian army will use a chemical attack, or thermobaric bombs, and lie awake thinking about these disgusting, inhuman weapons.

I spoke to a Kharkiv pal on Skype; he’s spending his days baking bread with friends, in a cafe above the basement he now sleeps in, then delivering it across the city to anyone in need. When rockets or bombs fall, he stops the car, and runs to find a hole to hide in. Do you have any gear, I ask. A helmet, a flak jacket? He laughs, and points at his woolly hat.

Reasons to get angry

Another reason to get very, very angry is the disinformation and denial swirling around this war. One woman told me she’d given up trying to prove to other people that her country is being bombed. ‘They have their own opinion’, she shrugged. I can’t be quite so philosophical. I see friends writing absolute nonsense on Facebook suggesting the atrocities are exaggerated, or faked, or that Putin is just kicking back against big bad NATO and we can’t really blame him.

I expect this sort of rubbish from Russian acquaintances who live in a dictatorship with almost no real media and harsh penalties for critical thinking. I expect a lot better from people back home. 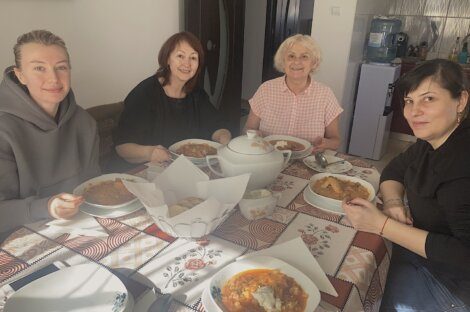 War makes us lose our humanity, though, and being constantly angry is a slippery slope. So I’ll focus on some good things. People are mostly good, in my view, if sometimes a bit rubbish (usually because they’re scared). That view is reaffirmed a hundred times a day here.

When I went to see the Odessan women yesterday, about 45 miles away in a small town, I was welcomed into a bustling kitchen where Marina and Lyudmila were – of course – making borsch. Their hosts were a sweet Romanian couple, who’d already had refugees staying the week before, and no doubt will host more in the weeks and months to come. I asked the woman, Lena, why she takes people in. Without blinking she replied: “Because it could be me next”. Then she started to cry.

Romanians, especially in this eastern region, are scared. Scared of war coming closer, of economic collapse. Everyone is tense, everyone is tired. But everyone is pulling together, and Romanians I speak to are rightly proud of the effort being made to welcome Ukrainians and lighten their load a bit. And they don’t just welcome Ukrainians, but annoying freelance journalists too. I’ve had so much help from locals – and far more food and Țuică plum brandy than is wise.

Talking to Marina, after the most delicious borsch made with one of Lena’s hens, we got on to this topic of generosity. Dobro vozvrashayutsa, she nodded. Kindness comes back around.

Two local appeals to raise funds to help the population affected by the Russian invasion have been set up. Hamnavoe resident Kate Niesciur is fundraising for UNICEF Ukraine while councillor Thomson’s Shetland Stands with Ukraine campaign will go towards the Red Cross Ukraine crisis appeal.

More reporting from Jen Stout can be found here:

Ukraine: A bit of light in the dark