THE SIGNING of a fisheries framework agreement between the UK and the Faroe Islands has been welcomed by local politicians.

On Thursday an agreement which sets out that the UK and Faroe will hold annual negotiations on the issues of access to waters and quotas was signed by UK ambassador to Denmark, Emma Hopkins, and the Faroese fisheries minister Jacob Vestergaard. 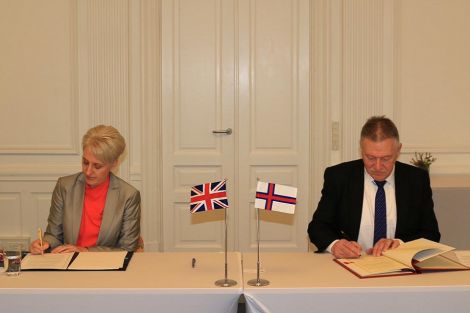 This deal is part of the preparations for the UK leaving the Common Fisheries Policy (CFP) at the end of December as it becomes an independent coastal state.

It is the second such coastal state agreement and follows the UK-Norway fisheries treaty signed at the end of September.

UK fisheries minister Victoria Prentis said: “This agreement will ensure that annual fisheries negotiations can take place this year to the benefit of our fishing industry.

“I would like to thank our Faroese counterparts for their constructive approach, and I look forward to building on the strong and historic links between our nations while taking further steps to responsibly manage our seas.”

Describing the deal as a “positive arrangement” Northern Isles MP Alistair Carmichael said the framework would provide greater certainty to fishermen in Shetland ahead of the UK’s exit from the CFP.

“The similarities with the recently agreed UK-Norway arrangement puts the UK in a good position,” he said.

“However, it will only be as good as the political will invested by the Scottish and UK governments to get good deals in the annual negotiations on access and quotas.”

“The first test for the framework will be the December negotiation where we will be looking for a significant reduction in the Faroese share of the Mackerel catch.”

Highlands and Islands Conservative MSP Jamie Halcro Johnston said the successful conclusion of the talks was “immensely significant” for the sector.

“It really does show the opportunities for Scottish fishermen now that the UK is negotiating for ourselves again as an independent coastal state, rather than having EU bureaucrats doing it for us,” he said.

“The only thing standing in the way of the revival of the industry, and the hundreds of jobs that will go with it, is the determination of the SNP to take us back into the EU and the hated Common Fisheries Policy.”

UK Government minister for Scotland, David Duguid, added: “Each year, the UK fishing fleet catches around £2.34m worth of fish from Faroese waters. Iconic species including cod, haddock, and pollock are landed in ports such as Lerwick, Peterhead and Ullapool.

“In previous years, bilateral negotiations with the Faroe Islands were led by the European Commission on behalf of the UK and other member states.

“This autumn, for the first time in over 40 years, the UK will be negotiating fishing opportunities for 2021 as an independent coastal state.”