AT THE end of April, the Garrison doors opened once more to Islesburgh Drama Group as they rehearsed and then performed and filmed their latest play You Made Me: Oliver. Written by Stephenie Pagulayan and directed by Morag Mouat, the play centres around the eponymous Oliver and his various relationships with four key women in his life.

Pagulayan has described the play, for Shetland Arts, as being “an exploration of misogyny, its definition and origins inspired by witnessing perceived misogynistic behaviour in our community”.

Of course, this is theatre in the time of Covid. After several excellent audio radio productions, returning to the stage with an in-person cast presented a number of obstacles. The cast and production team had new rules to stick to: social distancing, limited cast, restricted numbers in the theatre, face coverings when not performing…boundaries that no doubt presented many challenges to everyone involved.

But other than not physically being in the theatre to watch the play, you would never have known that there were such stringent measures going on behind the scenes. The cast did not have many opportunities to rehearse – casting and rehearsal was done via Zoom and they only had one dress rehearsal, one technical rehearsal and then the piece was recorded on the third day. Static cameras were there to capture the wider view of the stage and close ups of characters. Knowing this makes IDG’s achievement here all the more impressive. Watch it again and wonder at the dramatisation of such compelling characters with so many obstacles.

The play, just shy of fifty minutes in length, opens with Oliver and a woman – Hannah – from his workplace. Titled Mediation the audience is instantly placed as a listening third party to their conversation. It becomes quickly apparent that they are not actually in the same room during what essentially becomes two distinct and yet intricately related monologues.

As Oliver, Kevin Briggs is impressive to say the least. To begin, we see him as an arrogant, self-serving man who lords it over those he works with. Aloof and self-righteous, there is little for the audience to like. His critical nature is well revealed through his monologue with the audience, his posture being that of someone self-assured and confident in himself.

In mediation is Hannah, played by Donna-Marie Leask, an office secretary who is desperate to please the impossible Oliver. As his subordinate at work, he abuses his power making her feel vulnerable and wretched. Leask is utterly captivating. Between being desperately overwrought to sad and powerless, Leask’s portrayal will surely move many women who have felt commandeered and dominated in the workplace. What is significant however, is that this is no one-sided situation. Oliver repeatedly presents himself throughout the scene as exactly that domineering boss she presents him as.

By the end of scene one, we are left in no doubt as to how we are to see Oliver. Mean and churlish, the lights dim on a man whose pejorative treatment of women in the workplace leaves a sour taste in the mouth.

However, this is not where we stay. After feeling like the mediator at a work meeting, we are thrown into the waiting room of a marriage counselling session. And it’s from here on Pagulayan’s writing makes you question everything. 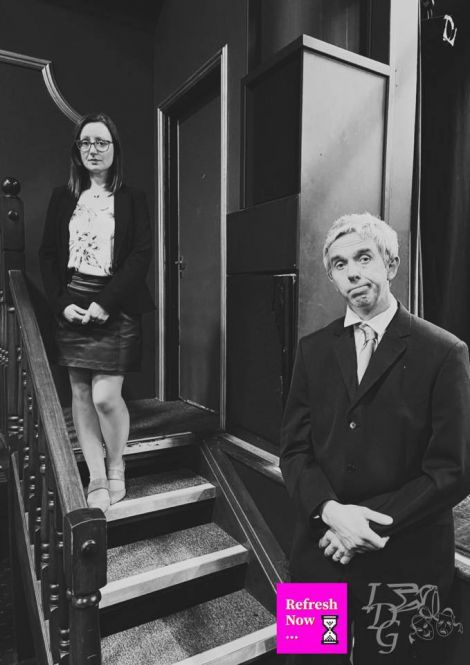 Mandy Phillips plays his long-suffering wife, Jennifer. The power dynamics between them are most strikingly shown with the physical stance they take. In scene one we see Oliver casual and laidback, cavalier with the feelings and anxieties of his colleagues; here we see him as a struggling husband whose marriage is on the brink of being irreparable.

He is seated while she, standing and accusatory fires misstep after misstep after him. He was a hard man to live with, but he thought he was giving her “everything [she] ever wanted”. The revelation of an extra-marital affair and the difficulties of living with a pernickety and obsessive individual drives a firm wedge between the couple.

But the scene also starts to show cracks in Oliver’s past. The play sensitively deals with infant loss, overbearing mothers and lost love. Poignantly, at the end of the scene, when trying to force Oliver into taking a stand to save their marriage Jennifer leaves him with the words that are devastatingly past tense: “I loved you”. In the quiet wake of her departure he echoes her words back and then the scene ends.

There is no grand lighting scheme for this production. And it doesn’t need it. The lights fade in and out as the women in Oliver’s life do. Our third scene takes us to the care home where he has housed his mother in her twilight years. It becomes evident almost immediately that his mother played by Chis Geldard was really the orchestrator of Oliver’s unravelling from the day he was born.

Now we are at odds as an audience. We don’t like Oliver. He’s a nauseating man with a penchant for belittling women at work; he’s an obsessive tyrant at home, demanding his own way with the most inconsequential of desires…although, hang on…he lost a child, his wife was unfaithful…and now his demeaning mother…

Geldard is riveting as Barbara whose jibes are beyond the pale and cut right to the quick. Oliver is physically shrinking – no longer lounging back in his chair with a devil-may-care attitude towards the complaint brought against him at work. Now he’s really brought low as he is called a “failure as a son” and a “failure as a husband”.

Over the course of the scene, we see how her abusive nature has shaped and moulded Oliver. In her presence he is subservient. His head hangs as he is dealt mean blow after mean blow by the woman who should have loved him the most. But the most crushing moment is when, for a moment, he believes she really wants to leave the care home and live with him. But her desire to leave is not a desire to stay with her son and the lights go down on a broken man standing thoughtfully with a pillow in his hands on the precipice of devastating choice.

The final scene, with Lesley Leslie as detective, brings the play to its conclusion. The mother is dead and he is being quizzed about the situation as it appears. The death is blamed on negligent care homes nurses, but Oliver’s face tells us a different story. At the end, the detective significantly notes that he is “free to go”.

The set design is simple and the props are sparse, indicating casually the location at which the scene is set. Chairs are used to indicate power and status – the symbolism is not lost on the audience. Neither are the red shoes worn by both the wife and the detective. In her angered ravings at her son, Barbara makes mention at the red shoes worn by women as being indicative of that woman being a prostitute – a stark reminder that it is not just men who belittle and denigrate women. Women can be pretty good at that too given the right circumstances.

You Made Me: Oliver is a captivating short play. The writing is clever and misdirects the audience from the start, ensuring we are not mere passive observers but partakers in some form or other. We witness the decline and hope in Oliver’s life and are forced to question what really makes us who we are, and what contribution we make towards who others inevitably turn out to be.

Wordplay 2021: Identity, creativity and a strong sense of place