ALLOWING women to be part of squads at Lerwick’s Up Helly Aa is something that will “definitely” be discussed when the committee meets next to discuss the 2023 festival.

Speaking to BBC Radio Shetland on Tuesday night Robert Geddes, the secretary of the Lerwick Up Helly Aa committee, appeared to give a hint that change might be a possibility.

Geddes spoke following a protest outside Lerwick Town Hall by equality campaigner Peter Hamilton who urged the local authority to facilitate a dialogue with the festival committee on the long-standing issue.

He said there was a case for all sides of the debate to get around the table.

“There is something there I think to have a sensible discussion, but I think everybody needs to come round the table and accept that there are going to be different views in what I see in my limited knowledge of social media is a quite poisonous debate,” Geddes said.

“We have not been round the table for the last couple of years for various reasons, apart from to discuss whether the festival is going ahead (…).

“I think we can look at it, we are planning to meet this year about the 2023 festival with some hope it will go ahead, and it is definitely something that will be at the forefront of the meeting.

“What the decision of that is I couldn’t tell you today, but it will definitely be discussed as we would do with anything that get put to us directly.”

Any proposal that would come from that meeting, Geddes said, would have to go out for consultation to all the groups that are involved in the festival.

Geddes also said Peter Hamilton had never been in touch with the festival committee to express his concern directly to members.

Both council convener Malcolm Bell and chief executive Maggie Sandison made it clear yesterday (Tuesday) that that officially the local authority had no locus in telling the Up Helly Aa committee how to run the festival. 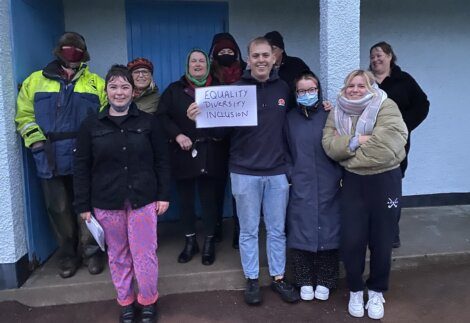 Up Helly Aa for Aa asked people to come along King George V playwark on Tuesday afternoon to celebrate equality, diversity and inclusion in Shetland.

It is however known that privately and outside the glare of publicity conversations are taking place. Sandison said that she would pass on Hamilton’s leaflet to the festival committee.

Hamilton has now called on the council to publish its legal advice on why the SIC was not in breach of equality legislation as alleged by him, adding that the last 24 hours had seen a “bit of progress”.

Debra Nicolson of  Up Helly Aa for Aa said that in the light of what was said by Robert Geddes the group would be contacting him privately to ask for a meeting with the [Lerwick Up Helly Aa] committee.

And the members of squad number one – the teachers squad – have raised more than £11,000 for Cancer Research UK Relay for Life Shetland by walking the Up Helly Aa halls route throughout the night until 8.30am this morning.