AN EXHIBITION featuring memorabilia from 60-plus years of the Shetland Fiddlers’ Society is on show in the foyer of Shetland Museum until the end of July.

Postponed for two years due to the pandemic, the fiddlers’ society was finally able to mark its 60th birthday at the weekend with a nearly full house concert in the museum’s auditorium.

The highlight of the show on Saturday – which formed part of Shetland Folk Festival – was a special interview local broadcaster Mary Blance held with renowned fiddle player Aly Bain, one of the original members of the group.

The group, featuring fiddle players from all over Shetland, had been assembled for the 1960 Hamefarin’. It made a huge impression on visitors and local alike, and soon afterwards became the Shetland Fiddler’s Society under the leadership of Tom Anderson

Ever since members have been rehearsing on a Wednesday night, and this did not stop during the pandemic when practises were held when online.

Mills said a recording of Saturday’s concert will be available at a later date.

“Da Fiddlers would like to express their gratitude to many folk for making this exhibition and concert possible,” she added. 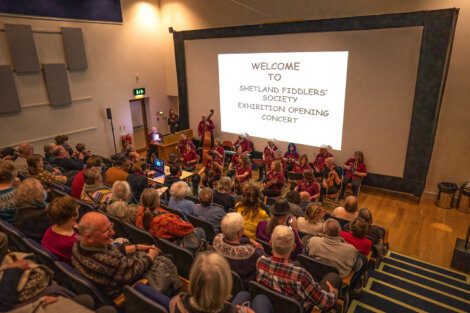 Books galore and a ‘place to go’: library prepares to open doors after big move