FIRE crews at Sumburgh Airport were mobilised on Wednesday afternoon after an inbound Eastern Airways plane sent out an alert.

However no further action was needed and the crews were stood down.

A spokesperson for airport operator HIAL said: “Sumburgh Airport fire service was mobilised after we received an alert from an inbound charter aircraft at approximately 12:08.

“After assessing the situation, no further action was required and our crew was stood down within 30 minutes of the initial call. Passengers disembarked as normal.”

THE WINNERS of a children’s artwork competition to celebrate next month’s platinum jubilee have been announced.

Living Lerwick received 120 entries from around the isles on the theme of Her Majesty the Queen visiting Shetland.

The task of choosing winners from each age category fell to Lauren Bulter of Laurel Art & Design and Carol Jamieson from Spiritual Matters, both based in The Mission Creativity and Wellness Centre.

The winning entries will be on display on Commercial street until the Peerie Jubilee Spree celebrations on the weekend of 4 June. Pictures will be in the window of the former RSM offices at the north end of the street, and on the Living Lerwick website.

Prize winners in each category were: 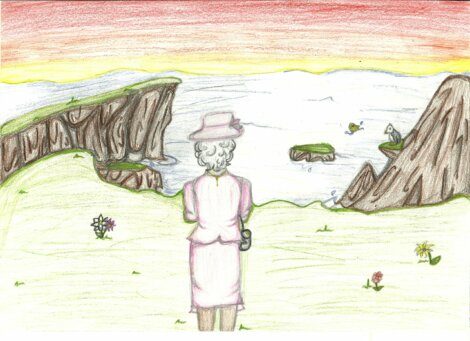 Living Lerwick project assistant Joanne Williams said it was a “tough job choosing the winners and we would like to thank everyone for their great efforts”.

More details on other activities on offer for the jubilee – including a ‘summer spree’ party on the street – can be found on the Living Lerwick website.

THE DATES of next year’s Shetland Folk Festival have already been announced.

The popular event, which returned last weekend after two years of postponements, will take place over 27 to 30 April 2023.

FOLLOWING change in guidance around Covid testing, Public Health Scotland has confirmed it will move to weekly case number updates instead of publishing them daily.

Since the start of May people are advised to no longer take Covid tests if they have symptoms, and instead just stay at home if they feel unwell.

This means that case numbers of positive tests will inevitably be dropping off considerably.

From 9 May the Public Health Scotland dashboard – which includes figures on case numbers across the country, as well as deaths and vaccination rates – will be updated on Mondays and Thursday.

From June it will only be updated weekly on a Wednesday.

SCOTTISH Sea Farms recently trialled a scheme to help working parents in Shetland with 25 per cent towards the cost of childcare.

Due to the success of the trial that work is already underway to roll-out the scheme across all its farming regions.

Shetland processing manager Joe Fullerton said: “With both my wife and I working, childcare costs are a big part of our monthly expenses.

“The fact that Scottish Sea Farms pay 25 per cent of our childcare costs is a great employee benefit. I don’t know of any other company offering this sort of support to their employees.”

AN INTERACTIVE concert for young folk which will “showcase some of the best and silliest musicians in Scotland” is due to head to Mareel later this month.

Children’s Classic Concerts’ take on Peter and The Wolf will be held at the Lerwick venue on Sunday 29 May.

The show’s blurb says: “This unique theatrical concert presentation of the much-loved music by Prokofiev has been arranged for wind quintet, representing Peter and his four brave animal friends as they battle the sly wolf.

“Our team of musical animals, led by Owen, will move effortlessly from madcap mayhem to virtuoso performances – with plenty of audience participation along the way.”