THE SCOTTISH Parliament was recalled virtually this afternoon (Wednesday) as first minister Nicola Sturgeon made a statement in response to the high number of Covid cases over the Christmas period, with figures showing more than 10,000 cases across Scotland on 26 and 27 December.

A further 80 cases have been recorded by NHS Shetland since 24 December. The local incidence rate of just under 400 for 100,000 population over a seven day period is well below the national average of almost 1,100.

Despite record numbers across Scotland – there were more than 15,000 new cases over the last 24 hours – figures of hospital admissions have remained stable over recent days. However, since there is a time lag between infection and illness, the first minister urged everyone to continue acting cautiously.

“Over the next couple of weeks we will have a clearer picture and that will help us reach informed judgement about the most proportionate response  going forward,” she said.

“In the meantime however, while we better understand the impact, and while more and more of us get the added protection of booster vaccination which will of course help reduce the impact of Omicron, we must try and avoid the sheer volume of cases overwhelming us.

“That is why it is prudent and indeed essential that we slow down transmission at this stage as much as possible. Indeed, that is why additional protections were announced last week and are now in force.

“And it is also why over Hogmanay and New Year’s day and for at least the first week of January we are advising everyone to stay at home more than normal and reduce contact with people outside our own households, and to limit the size of any indoor social gatherings, so that we don’t include people from any more than three households.” 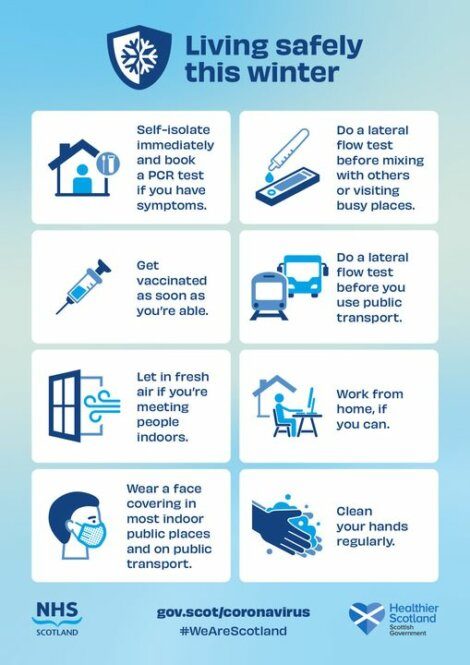 Challenged by opposition leader Douglas Ross why the Scottish Government doesn’t follow the English example in reducing the period people are required to self-isolate, Sturgeon said this was one of the most difficult decisions to make and one of the most important to get right.

“If we release people from isolation while they still may be infectious then, yes, we will release some of the pressures that is seen on the economy, and that shouldn’t be underestimated, but that will be short-lived because the risk that we take will actually accelerate the spread of the virus and then that pressure on the economy will increase in the medium and long term,” the first minister said.

“We need to get this right. Why do I say we will still take a few more days?

“We have a very rapidly number of cases right now, which is both a reason to do this [reducing the time of self-isolation] and a reason to be cautious about doing this.

“We still have fluctuation in case numbers inevitably because of the Christmas period, we need to see that settle a little bit over the next few days, and we need to reach a judgement that is right in terms of weighing the risks and the benefits of this.

“We would expect to do that over the next few days with any changes coming into effect from immediately after the New Year holidays.”

Meanwhile, NHS Shetland is running more walk-in vaccination sessions this week at Gilbertson Park games hall. These will be between 11am – 2pm tomorrow (Thursday) and on Friday.

A spokesperson for the health board said: “There will be no appointments, just turn up. Anyone who is eligible is urged to come along, including those aged 12 and over who have not yet had a first dose, or 16 and over and now due a second dose or 18 and over and are due a booster.

“We are also especially appealing to anyone who missed getting vaccinated earlier because they had tested positive or were isolating, or missed an appointment for any reason. But remember, you must leave a 4-week gap (12 weeks if under 18) between testing positive and getting vaccinated. Information on the vaccine and eligibility is here.”