HARRY’s Department Store has lodged plans to build flats in its main toy store area as its owners look to diversify in a bid to safeguard the future viability of the business.

Parents and children should not fret, however, as the plan is to relocate those products elsewhere in the building.

Two flats are being proposed in what is currently the main toy shop area, with a third planned in the floor above, which is a store.

Overall the shop floor space would reduce by nearly 200 square metres, but the owners feel they can adapt the remaining area to continue to provide the same range of products.

A statement submitted to the planning service said the move to build flats was one way of supporting the business amid increasing threats to the retail sector.

“The department store is a family run business, established in 1962, which has grown over the years into a popular and well-known shopping destination,” it said.

“Retail businesses face increasing pressures and large premises without the flexibility to adapt to suit future changes may not be viable in the long term.

“The applicant wishes to safeguard the future viability and success of the business to ensure it remains a feature of the town centre.” 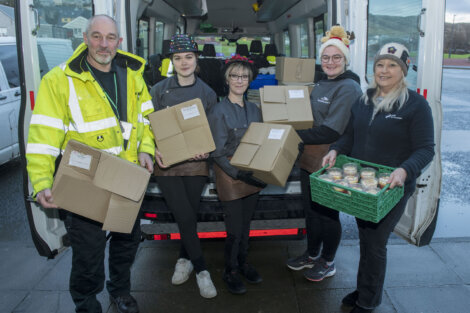 STAFF from the Viking Energy wind farm have helped spread some festive spirit by bringing Christmas dinner to families most in need across Shetland.

Viking’s community engagement manager Julie Graham said: “It has been great to be able to help so many families and individuals especially in these difficult times”

The delivery of the parcels will take place this week and has been organised by the Community Payback Unpaid Work Scheme.

Chief social work officer with the SIC Denise Morgan said the parcels will be delivered by people doing unpaid work as part of a community payback order.

“The festive season can be a particularly difficult time for individuals and families and advice on living costs can be found at www.shetland.gov.uk/costofliving  or phone 0800 030 8780,” she said.

NHS SHETLAND aims to submit an ‘initial agreement’, which is a proposal to confirm the need for a replacement of the Gilbert Bain Hospital, during the course of 2023.

This is seen as a key moment in the long process to reach a decision on whether the Scottish Government will invest in a new ‘health and care campus’ for Shetland.

In a letter to Highlands and Islands Conservative MSP Jamie Halcro Johnston, health secretary Humza Yousaf said that while a precise timeline has not been agreed yet, he expected to receive the health board’s submission next year.

Director of nursing and acute services at NHS Shetland Kathleen Carolan said: “This will be received by the Capital Investment Group of the Scottish Government which will then consider if the proposal is suitable to move to the next stage in the process which would be the submission of an outline business case.

“We will be in a position to submit this key stage (ie the IA) in the business case development process in 2023.”

UNITE members working for offshore services company Petrofac at a number of BP oil installations including Clair and Clair Ridge are set to begin a 48 hour walkout on 29 December.

The dispute centres on the working rotation, which is currently a three on/three off rotation, and involves 76 union members.

Unite industrial officer John Boland said: “Unite’s members have been left with no choice but to take further strike action due to the indifference and intransigence shown by Petrofac management. Several rounds of 48-hour strike action will now take place following our members rejecting a latest pay offer which represents a real terms pay cut.

“The Petrofac workers are absolutely determined to continue with strike action because the company can easily afford to settle this dispute. We would encourage them once again to do so and allow these workers to get back on with the job.”

The union said a further 170 members are staging a 48-hour strike on Repsol offshore installations from today.