A CROWDFUNDING campaign has been launched to raise cash for a two-week archaeological excavation in a field in Scalloway adjacent to where human remains and artefacts were discovered last year.

Kristian Leith aims to raise a total of £19,425 to carry out the dig in the summer to see if more can be found as traditional funding routes appear to be a non-starter at this stage.

Last year a total of 26 human remains, some structures thought to be from the Pictish era and a number of ancient artefacts such as a comb and painted pebbles were discovered in Leith’s garden at Upper Scalloway after he began groundworks for a garden shed.

It followed on from a discovery of structures and human remains in the area in 1990 when housing was being built.

Questioning whether there was more to be found in the area, Leith brought in Orkney archaeological company ORCA to carry out geophysical surveys in the adjacent land between the Mill Brae road and his home in Upper Scalloway. 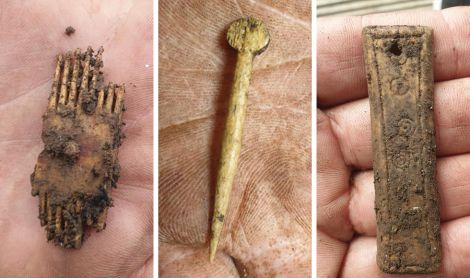 Some of the artefacts found during the dig last year.

The company highlighted a number of anomalies and Leith wants to investigate these further.

A report from ORCA said: “The objective of the excavation would be to confirm the presence or absence of archaeological features.

“It is not within the remit of this project to fully excavate any structures or features. If archaeological features are encountered, the excavation would investigate their date, nature and condition with the minimum amount of disturbance.

“It is important to stress that, as with any geophysical survey, although the results show features which are likely to represent archaeological remains, it is also possible that they are geological in nature or result from natural soil conditions.”

The project would be concluded with an assessment of the site’s archaeological significance and potential recommendations to extend the outcomes.

Leith, who has called the project Skailway, said he has had to go down the crowdfunding route as funding from the likes of Historic Scotland or Shetland Amenity Trust would potentially only be available if there is “definitive proof” that there are archaeological features in the field.

“There is no funding available for this project at the moment,” he said.

“If we find something and it warrants further investigation then there would be funding available. We need to get to that stage by funding the first investigations ourselves.”

There is also key focus on community engagement, Covid regulations permitting, with voluntary organisations, students and youth/school groups all potentially in line to be involved.

“We feel this two week period should not only be investigate, but also educational,” Leith said.

“Could this site be the lost or forgotten ancient Viking capital of Shetland?

“We think it is. There is only one way to find out. Every single penny will go directly to ORCA and will help us to shed light on Shetland’s forgotten history.”

The link to the fundraising appeal can be found here.

Redefining community – big plans ahead for Nesting, Girlsta and Wadbister