A GRADUATE from Shetland is celebrating after winning an award at the Gray’s School of Art in Aberdeen.

Hannah Cutt received a ‘highly commended’ award in fine art for her painting.

The 23-year-old’s work explores pivotal moments from her own childhood and strikes up conversations with her past self, exploring the conflicted relationship she has with her own inner child. She uses soft colours and repeated metaphorical motifs.

It came as the Gray’s Degree Show launched on Friday (10 June).

Cutt said: “I feel very lucky to have won this award. It’s really surreal but I am so excited to be showcasing my award at Gray’s Degree Show.”

LERWICK Port Authority has bid farewell to some long-serving colleagues.

Lindsay Brown joined the authority’s vessels as an engineer in 2013, having previously served as a skipper with Shetland Islands Council’s ferry service after working as a fisherman.

Also retiring are Iain Tulloch and Ross Bray, both of whom served the authority as port controllers, with a combined period over 20 years.

Tulloch came to the role in 2008 with extensive experience working with vessels as a shipping agent and knowledge of the authority having been a board member for 13 years.

He retired during the pandemic, with the informal gathering a belated opportunity to mark his departure.

Bray joined the authority in 2012, having come from a 36-year career in shipping logistics and agency management at GAC Shipping.

The pair also worked together at Hay & Co.

Lerwick Port Authority chief executive Calum Grains said: “All three members of staff have used their combined years of marine experience in making a positive contribution towards our operations, both on our vessels and in port control, serving our customers well over the years.” 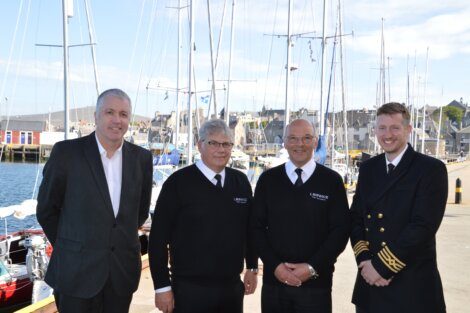 THE NORTHMAVINE Community Development Company is hosting a series of events as it draws up a new development plan for the area.

After a session was held in Hillswick last week, an event is being held at the Sullom Hall today (Tuesday) between 2pm and 7pm.

There will be another at the North Roe Hall on 16 June from 9am to 4pm, as well as a session at the Ollaberry Hall on 21 June between 3pm and 8pm.

People can offer their views on the development of Northmavine, while a variety of organisations will also be on hand to showcase what they offer.

THERE will also be drop-in sessions over the coming days in Lerwick and Brae to give parents help in completing online applications for the YoungScot National Entitlement Card.

There will be sessions at the Anderson High School today (Monday), Tuesday and Wednesday between 4pm and 5pm, and on Friday between 2.15pm and 5pm.

Brae High School will also be open between 4pm and 5pm today and Tuesday.

The events are for parents or guardians with children aged 11 to 15. Children also need to attend so their photo can be taken.

A LIFESAVING safety campaign is poised to reach a number of areas in Scotland, including Shetland, to offer lifesaving swim lessons this summer in a bid to teach water awareness skills across the country.

Around 70,000 children will be offered water safety lessons during this year’s Drowning Prevention Week organised by the Royal Life Saving Society (RLSS) between 18 and 25 July as part of the Learn to Swim programme.

This is a partnership between Scottish Water and Scottish Swimming, spanning across almost 40 areas in Scotland.

Scottish Swimming CEO Euan Lowe said: “Ensuring children can learn to swim will provide essential life skills to keep them safe in around water following a period when they may have risked missing out on the learning and fun that goes with it.

“As part of the Royal Life Saving Society UK’s Drowning Prevention week, coaches will be delivering lessons specially adapted to include key water safety guidance including the Water Safety Code and basic skills such as floating which are needed to survive in cold water.”