AS THE cleaning up of graffiti which appeared at a number of locations in Lerwick overnight got underway earlier today there was widespread condemnation of the actions of the perpetrators.

Lerwick Town Hall, the ‘Welcome to Shetland’ sign on the Esplanade, BBC Radio Shetland, Sound Primary School as well as the playpark which hosts the annual burning of a replica longship, the climax of Up Helly Aa celebrations, were targeted by vandals. 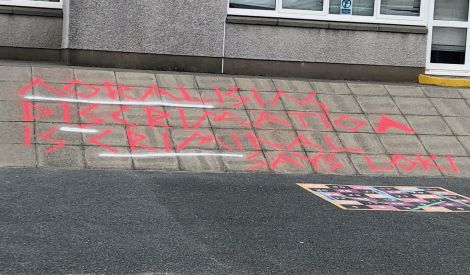 The graffiti in runic style all appear to make reference to the topic of gender equality in the annual fire festival celebration, which has divided the community in recent years.

However there was little division in condemning the actions of the graffiti sprayer(s). On social media, local people on the whole did not mince their words, describing the graffiti as “bloody disgusting”, “disgraceful” and “childish”, although there were also some lone voices in support.

He added of the Town Hall vandalism: “Never mind that this is a Grade 1 Listed building, and has recently undergone an enormous amount of conservation work, there is a social event scheduled for later today and our cleaning teams will now be under pressure to remove the graffiti before the celebrants arrive.

“This kind of childish behaviour is really irresponsible and thoughtless.”

Police meanwhile are appealing for anyone with CCTV who lives near or on the routes to the affected buildings to check back overnight Monday into Tuesday.

Anyone who can help police in their enquiries is asked to call 101 quoting incident number 0681 of 20/7.

Screenplay to ‘go into retirement’ after 2023 festival