ROADSIDE signs which were put up by the Scottish Greens to the south of Lerwick have been taken down as they did not meet council rules around erecting election posters.

The signs in question were stuck into the verge along the A970, starting from Gulberwick and heading south.

But their size, and the fact they were not tied to streetlights, meant they violated council guidance.

A spokesperson for Shetland Islands Council said the guidance on roadside posters was previously issued to all election candidates.

The Greens’ Alex Armitage is vying for the Shetland South ward, which now goes as far north as Gulberwick following boundary changes. 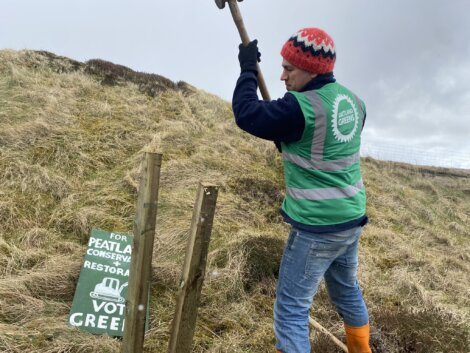 The party is also fielding contestants in the central and west wards.

The SIC guidance says in the case of roadside posters, permission should be sought from the council before they go up.

But Armitage said he previously had permission from the council for the signs before staff changed their mind following a query from another candidate.

“In previous campaigns we’ve been given permission to put signs by the roadsides using fence posts,” he added.

“Obviously I’m disappointed as I feel I’ve acted in good faith, but I can understand why the guys in the roads department changed their mind.

“Elections are competitive and it’s important that there’s a level playing field.”

A number of conditions must also be met when it comes to election signs, such as the size.

Posters must be tied with string or fixed with plastic cable ties – adhesives are not allowed.

Any posters or signs fixed by adhesive to “street furniture” could result in prosecution.

Meanwhile any election signs and posters must be removed within 48 hours of polling day, which in this case is 5 May.

Candidates are also warned that they cannot place any posters or “sandwich boards” on or within boundaries of polling places during voting hours.

Armitage said the hand-painted Green signs were made from recycled materials.

“The artwork is a collaboration between myself and a few artists that live locally in the South Mainland,” he added.

“I’ve already had a few people asking if they can give the signs a new home; if anyone else would like to display one I’d be happy to hear from them.”

The full list of candidates standing for May’s election can be found here.