AS PEOPLE are anxious to learn whether they will be allowed to visit friends and family in their homes again, NHS Shetland chief executive Michael Dickson believes first minister Nicola Sturgeon might well announce some relaxations of the Covid rules when she addresses parliament on Tuesday.

Dickson also warmly welcomed news that a valid Covid vaccine may well become available in the not too distant future after pharmaceutical firm Pfizer announced that its vaccine was 90 per cent successful in phase three tests. 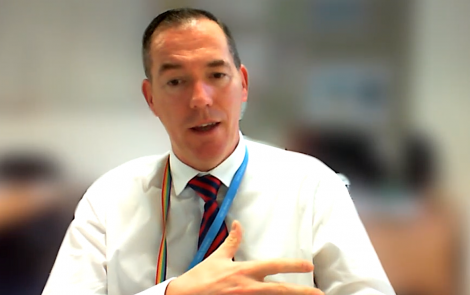 Speaking to Shetland News on Monday the health board boss said he was not able to read the first minister’s mind with regards to Tuesday’s update on the tiered structure of restrictions, but  he was confident that some relaxations might be possible.

“We have been in tier one plus now for a little bit and there hasn’t been a significant rise in cases, so I think the question is how far are they [the Scottish Government] willing to push that particular envelope: will they move us down to tier zero, or will they hold us in tier one and allow some household mixing,” he said.

“I am between two points in this: there is the possibility that we may stay in tier one but will be allowed household visiting within the tier one restriction or, alternatively, we will go down to tier zero which will give greater relaxation of restrictions.”

He added that there might well be some trade-offs to allow these greater freedoms to happen.

And he urged people again to be “mindful” while acknowledging that some will have to travel between Shetland and the Scottish mainland, and even have to travel to tier three areas.

“All we are asking of people, whatever tier we are going in, is for them to be mindful, and if they have travelled to the mainland just don’t presume that everything is okay, just be that little bit extra cautious.”

While news of the successful Covid-19 vaccine testing has brought some much needed optimism in that there could indeed be an end to this pandemic in sight, Dickson said it was important to focus on the next few months and the second wave.

He confirmed that NHS Shetland would receive some further testing capability over the next weeks that would allow faster testing of social care staff, for example.

He said he felt the health board and also the community was well prepared for the winter months.

“All the evidence is suggesting that the whole of Scotland is in a much better place; we have increased our intensive care across Scotland substantially, we have now a number of treatments for Covid-19 which improves the outcome markedly for people,” he said.

“On the whole people in Shetland are behaving admirably well because they know how important it is as they lived through the first wave.”

And with regards to a Covid-19 vaccine potentially becoming available within months, Dickson said the health board would apply the same principles that are in place for the annual flu vaccination.

“The Covid vaccine is coming towards the end of the phase three trials, so we are potentially not that far away,” he said.

“We have put the plans in place, so should we need to do it we could start delivering the vaccination as early as December, but we could equally manage a situation if it would come in January or February.

“The first set of vaccination that will come out will be relatively small numbers and we will focus on those people who are at the greatest risk.”

With regards to the flu vaccination Dickson said the uptake this winter has been “phenomenal”.

The health board expects the next batch of the flu vaccine “in the next couple of weeks” which will allow all priority cases (phase one) to be vaccinated.

“The flu jab is an additional precaution that people who are vulnerable to Covid can take, because fighting Covid is difficult, fighting the flu is difficult but fighting these two together is really difficult,” he said.