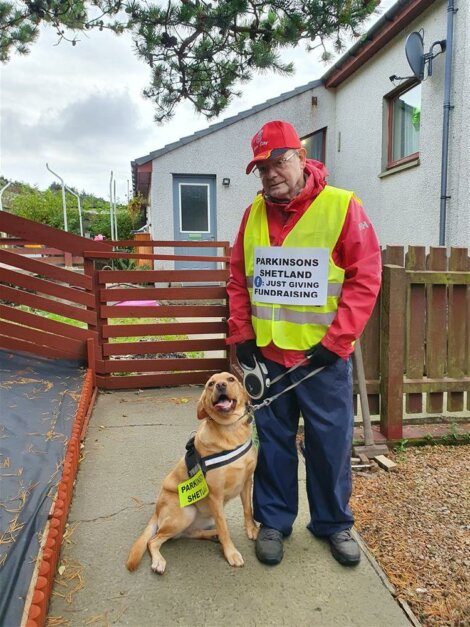 Eric Uren, from East Voe, is walking seven half marathons in seven days.

The East Voe resident said a member of his family suffered from  Parkinson’s which get worse over time.

“I have seen the efforts being made by some of them to limit the effects of their illness, and trying to live as normally as they can, for as long as they can,” he said.

“It is both heartening and heart breaking at the same time”

Taking his Labrador dog with him, the active pensioner – who also drives a minibus for Scottish Sea Farms – set out on his fourth walk this afternoon (Thursday).

He said he usually does not venture too far from home, walking either around Scalloway, out to Burra or to the Brig o’Fitch.

It usually takes him around four hours to complete the 13.1 miles of a half marathon.

Uren has so far raised £640 but would be delighted to exceed his £700 target.

Treatment, therapies and support can help people manage the condition of which around 145,000 people in the UK suffer from, but unfortunately, so far no cure has been found.

“Funding the right research into the most promising treatments, we get closer to a cure every day. We can do. But we can’t do it without you,” Parkinson’s UK said.

Eric’s fundraising effort can be supported via this JustGiving page.

Ertie the trow settles into new home in Burra