SHETLAND actor Douglas Henshall says he wants to leave the show “on a high” as the first episode of his final series gets set to air next week.

He also believes the story of his character DI Jimmy Perez has come to its “natural end”.

The first series of series seven will air on the BBC on Wednesday (10 August) – Henshall’s last as Perez.

Speaking ahead of the broadcast, the actor said he decided to leave the show a few years ago as he felt the time was right to find a resolution to Perez’s private life.

“I never wanted to ruin the things that were unique to him and our series so it felt like the right time to wrap up his story in a way that would be satisfactory to everybody,” he said.

When it comes to series seven, Henshall said the first episode begins with an apparent missing person – “but then it becomes murkier and murkier”.

“I really love that there’s no dead body at the start of this new series and the suspense of that is great,” he added.

Perez has become the figurehead of Shetland, which first aired in 2013 using characters from Ann Cleeves novels, and Henshall said it has been a “real privilege” to play his role.

“Flawed humans are always the most interesting to play because I feel they are the most truthful,” he added.

The actor also revealed that his final scene during filming was not in Shetland – but in a car park in Kilmacolm in Renfrewshire.

With Covid delaying the ‘wrap’ three times, he admitted it was a bit of an anti-climax. 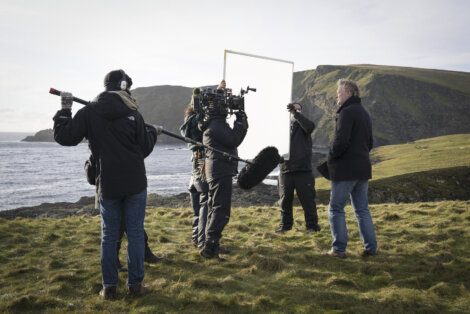 A behind the scenes shot of Henshall at work. Photo: BBC/Silverprint Pictures/Mark Mainz

“I did say a few words of thanks to everyone who was there but it’s impossible to encapsulate 10 years of work. Shetland has meant a lot to me and it’s going to take some time to sink in that I’ve left the show,” he said.

However, Henshall said returning to Shetland in the future for leisure – and not for work – is high on his agenda.

The series will see Tosh as a mother – series six ended with news that she is expecting a baby – as the character tries to balance her private and professional life.

“Our guest cast is absolutely outstanding, as ever, and there are some big moments for the core cast too, with Perez’s ending and another series regular being thrown into serious jeopardy,” O’Donnell added.

The actress, however, said she is “bereft” at Henshall stepping down from the show. O’Donnell is some people’s favourite to take on the lead role when series eight films in 2023, but it remains to be seen who the eventual successor will be.

“Having the privilege of working so closely with Dougie for all these years was an insane luxury,” O’Donnell added.

“I’m trying to be grateful for everything we experienced together rather than focussing on the obvious sadness. I’m also incredibly proud of what we achieved together, and I know he is too.”

When asked about the strengths of Shetland and its success, O’Donnell said she feels the most important thing about a TV show is having a “well-defined world that I want to spend time in”.

“I think we have created a world that is very unique and really atmospheric,” she reflected. “The beautiful landscapes, the intriguing stories and, of course, the characters who have really grown over the years.” 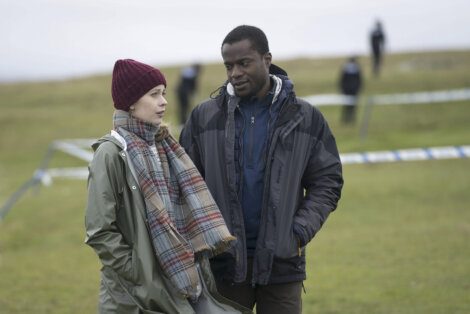 There is another full cast in series seven, including Sorcha Groundsell (left) and Ladi Emeruwa (right). Photo: BBC/Silverprint Pictures/Mark Mainz

He said there is a “different level of confidence” in the character this time around.

“After his previous indiscretions, he’s more self-aware and with less to prove to others,” he said.

“We all reach a point in our lives and careers when you’re doing it for yourself and not for others.

“If the more senior detectives in the office didn’t respect Sandy, he wouldn’t be there. Seeing Perez having his rights read to him highlighted to Sandy and everyone else that we’re all fallible and sometimes that’s okay.”

Speaking about the new series overall, Robertson added: “What I would say is, again, the past always comes up in Shetland and this series is no exception to that rule and this time it is a not-so-distant past that had affected the whole islands.” 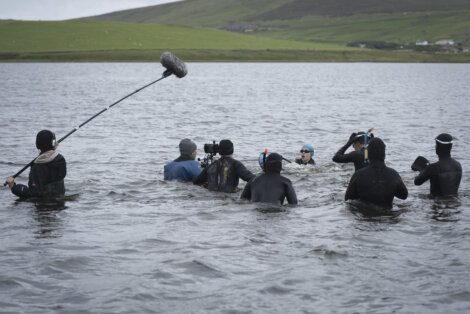