PLANS for a satellite launch facility in Unst appear to have suffered a setback after Historic Environment Scotland (HES) turned down an application for work to take place at the site of the historic Skaw radar station at Lamba Ness.

The public agency said the current plans would have an “extensive” impact on the former Skaw radar station to the point where it would no longer be deemed a site of national importance.

The space centre team plans to build a launch pad complex and associated infrastructure on the peninsula, which is home to the remains of a Second World War radar station.

HES said it is a “remarkably well-preserved military complex dating back to the 1940s” which was used to warn the authorities about aircraft observed in the radar’s transmission area.

The former radar station is deemed a scheduled monument of national importance.

More than 200 individual features, such as foundations of buildings/structures, concrete blocks, tracks, gun emplacements and bomb craters, could also be affected in some form. 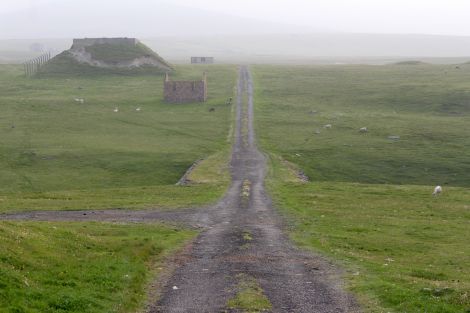 They state that the development is of national importance, with “significant public benefits” outweighing the impact on the cultural significance of the former radar base.

The applicant states that alternative sites have been fully explored for the launch site and that significant effects on the scheduled radar station have been minimised and the remaining assets enhanced through carefully considered design and mitigation.

This includes a programme of archaeological works which would cover the entire footprint of the proposed development.

Historic Environment Scotland is responsible for designating sites and places at a national level, including scheduled monuments and listed buildings.

Scheduling is the process that provides statutory protection for monuments and archaeological sites of national importance. Consent is required to carry out certain work to scheduled monuments.

In its conclusion to the scheduled monument consent application, HES said that the impact on the former radar base would be such that it would no longer be of national importance.

“No steps have been taken to minimise or avoid these impacts,” it stated.

“Whilst recognising the probable benefits of a national space centre in Scotland, the application has not demonstrated that the construction of the space centre at this particular location, within the scheduled monument and requiring such significant loss of its component features and impacts on its cultural significance, is imperative.

“There is therefore no compelling case for the nationally important historic environment considerations to be set aside for the development.

“The application has not demonstrated that any benefits that would arise from the application could not be achieved elsewhere, outwith the scheduled area. In addition, the design of the development does not demonstrate that efforts have been made to minimise the impacts of the development by avoiding the key archaeological features of the monument.”

It concluded by saying that the “works are not consistent with policy” and are contrary to scheduled monument policies.

“While there are circumstances that would allow for departure from such policies due to the national significance of a development outweighing or overriding the national importance of a scheduled monument, in this instance no such conclusive case has been made,” it said.

“The application should therefore not be granted.”

The applicant has the right of appeal against the refusal.

HES is the latest organisation to express concern over the plans, following on the NatureScot and the RSPB.

Shetland Space Centre chief Strang said in response to the HES concerns: “We are greatly surprised that Historic Environment Scotland (HES), an organisation that has done nothing to preserve the site for the last 50 years, has refused scheduled monument consent, particularly given that the Shetland regional archaeologist saw no reason to object to our plans in principle.

“We will now review in detail the reasons behind the HES decision and our understanding of that will inform our next move. Our team will take stock and hopefully enter into constructive dialogue with HES to allow them the appropriate comfort to allow consent.

“But be in no doubt: we will vigorously contest HES’s refusal of permission to develop and enhance a site which, while evidently of national significance, has for years been left in a dilapidated state. Our mitigation plans include the provision of resurfacing and repairing the visitor road access, building of an interpretation centre and public conveniences as well as the creation of local jobs.

“Our plans show little or no negative impact on the old RAF concrete buildings and by melding the old with the new will create economic prosperity in Unst and Shetland for years to come.”

Shetland Space Centre said that the launch facility will ultimately create around 140 jobs in Unst an “inject at least £4.9 million per annum into the island’s economy”.

It will provide a further 70 jobs throughout Shetland, it said, adding a further £2.9 million in gross value per annum to the economy.

The space centre team said the plans are supported by a “thorough and extremely comprehensive” environmental impact assessment report.