A BIG milestone has been reached in the construction of the new Fair Isle Bird Observatory after the first of the building’s modules arrived by boat.

Six modular units arrived at around 7am today (Wednesday) following an overnight trip from Kirkwall on a barge with the help of tugs Green Isle and MTS Valour.

A total of 34 modules are still to be shipped to Fair Isle, but due to the weather smaller vessels may have to be used.

It means the building will effectively be pieced together with pre-made rooms, instead of being built from scratch in the remote Fair Isle.

The previous building burned down in 2019, with no injuries reported, and the new one is due to be constructed on the same site.

The modular units had a long journey, having been made in a factory in Sheffield before heading to the Grimsby docks.

They then were shipped to Kirkwall in Orkney in September, where they have remained for more than a month while awaiting a weather window with the right wind and swell conditions.

With the first modular units due to be put in place tomorrow (Thursday), Fair Isle Bird Observatory Trust chair Douglas Barr said it was a “huge” milestone. 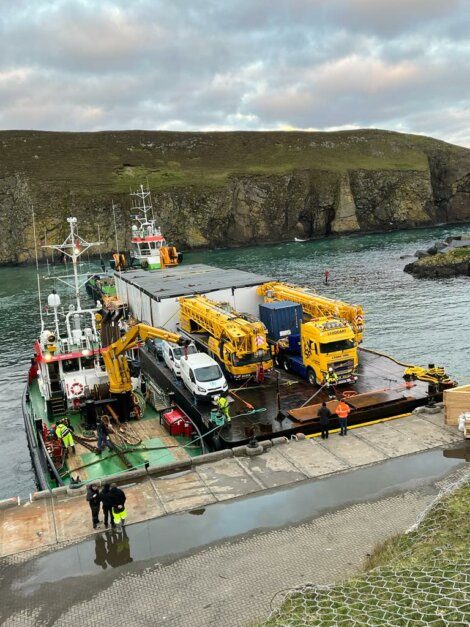 “We’ve now moved from the observatory being constructed elsewhere on the UK to now actually physically being in Fair Isle,” he said.

“So you can now see it beginning to take shape actually on the site. That’s fantastic to see.

“It’s obviously very well received in Fair isle by the residents, because throughout the day from first light there’s been a constant stream of them all coming up to see it. I think that exemplifies how important it is to Fair Isle.”

Barr added that the weather delays of the last few weeks will have an impact on the timescale, but it is still on course for opening in 2023.

Over the years the observatory has provided guest house accommodation for visitors, as well as a source of employment and a place to eat and drink.

As well as being a popular visitor attraction for bird watchers, the observatory has had an important research role, gathering bird census and migration data for the past 70 years too.

The budget for the rebuild was set at £7.4 million, with Highlands and Islands Enterprise (HIE) and Scottish Government supporting the development with a funding package totalling £2.35 million.

“The observatory plays a crucial role in supporting the viability and sustainability of one of the most remote islands in the UK.

“The project is bringing back a key income generating facility, providing employment, hosting visitors to the Island, and providing world renowned research. This will provide significant spin-off benefits for all island businesses as well as the community.

“The facility also addresses other challenges for Fair Isle such as retaining and attracting population, and the need for tourism to be more sustainable. We are very much looking forward to seeing the observatory open once again.”

Those working on the construction project are set to be housed in local accommodation, while the ‘Puffin’ building used by island owners National Trust for Scotland has been refurbished and will also take in staff.

The project is also being supported by the trust’s own funds, as well as an international crowdfunding appeal to raise £650,000 for the rebuild.

‘Focused on the job’ – 30 years and counting for CAB