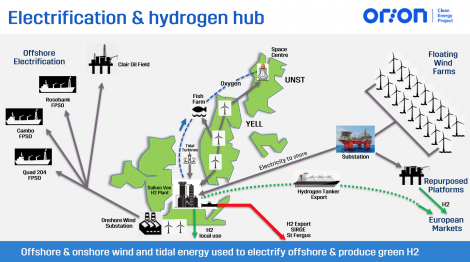 This graphic supplied by the Orion project team summarises the project which has been described as ‘transformational’.

SHETLAND doesn’t do small. When Sullom Voe Terminal was at full production in the 1980s it was the largest oil export terminal in Europe. Twenty years later, plans were drawn up for the largest and most productive onshore wind farm in Europe.

With that particular wind farm in the early stages of being built, the next mega project emerges over the horizon. And this time it is not just big – it also has the calibre of being “transformational” and promises to launch Shetland into the net-zero era, albeit on a massive industrial level.

It is now almost a year ago that Shetland Islands Council joined forces with Highlands and Islands Enterprise (HIE) and the Aberdeen-based Oil and Gas Technology Centre (OGTC) with the aim of placing the islands right at the heart of a new industry that would decarbonise the oil and gas industry by connecting offshore installations to on and offshore wind farms and, ultimately, produce huge amounts of green hydrogen to satisfy expected local, national and international demand.

What started life as the ‘energy hub’ quickly gained momentum and, along the way, became the Orion clean energy project, a name borrowed from Greek mythology that underlines the council’s ambition of ‘reaching for the stars’.

Already the alarm bells are ringing in some quarters of the local community where people have started asking questions whether an “industrial” response to the climate emergency is the appropriate thing to do.

Others, meanwhile, are bringing their businesses in position so they can benefit from what could signify the next round of massive inward investment. 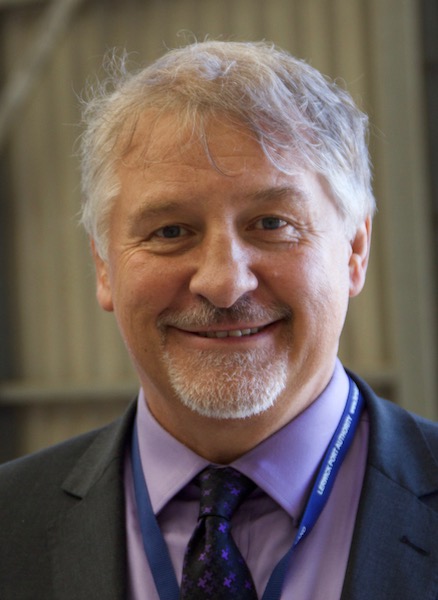 And the fact that the council has hired well-known and equally well-connected energy consultant Gunther Newcombe as its Orion project co-ordinator can only mean one thing: the SIC means business.

So what is Orion – or Opportunity Renewables Integration Offshore Networks – all about?

Some in the Orion project team are already raising the expectations by declaring Shetland as the “first green island in the UK”.

But aside from the industrial opportunities will this project also help eradicate the appallingly high level of fuel poverty in the isles and help tackle Shetland’s enormous carbon footprint which stands at 650,000 tonnes of domestic and industrial CO2 emissions per annum?

Newcombe, speaking to Shetland News last week, puts the ambition in a nutshell by saying that Orion has the potential to “create a future for Shetland beyond petroleum, establish a new industry that gives you clean energy, that addresses fuel poverty, put you in control of that industry, and create employment and new skills.”

The magnitude of all this is, of course, of national importance as Britain moves gradually towards a net-zero economy over the next 30 years until 2050. And Shetland, it seems, is well placed to capture some of the opportunities along the way.

The first step in this “transformational” process is, according to Newcombe, to use some of the energy from the Viking wind farm to start electrifying offshore oil and gas installations.

What did sound like an alien concept a year or two ago seems to have become very much the industry standard. In fact, Newcombe goes as far as saying that without a “net-zero emission profile” three large new oil and gas developments to the West of Shetland – Clair South, Rosebank and Cambo – would not happen unless they take electricity from wind farms.

“They have to be totally different to what has been done before, otherwise they will never get sanctioned,” he said. “Investors will not put money in because they have to be seen to be green.

“It is quite important to keep that sector [oil and gas] going, but at the same time for that sector to continue to produce it needs to meet net-zero targets.”

“It’s about using Viking wind farm to get new developments sanctioned west of Shetland to be net-zero and then on the back of that using offshore wind at scale to electrify the whole of this region.”

The objective is to have all West of Shetland oil and gas installations net zero by 2030 and to save eight million tonnes of CO2 from offshore oil and gas by 2050.

Once offshore electrification has been achieved the Orion strategy moves straight on to its next target: to “transform Shetland’s current dependency on fossil fuel to affordable renewable energy to address fuel poverty and improve community wealth”.

A number of funding applications to the UK as well as the Scottish Government have already been lodged with the aim to have small-scale hydrogen pilot projects up and running by 2024/25.

Newcombe said Shetland is being presented with a unique opportunity to free itself from being charged the highest energy prices anywhere in the UK and take control by creating its own clean energy industry.

“If Shetland sits back and does nothing it will import those clean fuels, at a premium,” Newcombe warned.

“So why not create your own fuel base here in Shetland? It’s about utilising onshore and offshore wind to provide the isles with the energy to actually develop hydrogen.

“We estimate that Shetland needs about 60,000 tonnes of hydrogen per year to replace the current diesel, patrol, and marine oils.”

In order to do that roughly 600MW of wind energy is required, onshore and offshore.

The possibility of a very large floating wind farm (up to two gigawatts in size) to the East of Shetland by 2030, currently part of the Crown Estate licensing round, forms very much part of the Orion strategy of creating Shetland’s own hydrogen industry.

“This is all about creating your own affordable clean fuel on the island, both for domestic and for business use. It’s about creating a new industry,” Newcombe said.

He concedes that at the initial stage there will be next no impact on tackling fuel poverty, but added that “one of the ambitions of this is to make a real impact on fuel poverty”. So far however there is very little detail available on this specific point.

And the council’s latest update of its corporate plan admits that due to the way the national grid and the energy industry is set up there is little that can be done to reduce islanders’ fuel bills.

That means Orion is more about building industrial capacity and creating a new industry utilising offshore wind to create green hydrogen at scale.

“There is no other industrial cluster in the UK that has this ambition currently,” Newcombe said. “The intent is to export up to 300,000 tonnes of green hydrogen per annum, five times the quantity that is needed on island itself.”

That could equate to as much as 12 per cent of the UK’s total requirement by 2050.

He added: “We see Sullom Voe as the site of development; there is 1,500 acres of industrial land between the two plants and there is also Sella Ness and Scatsta. This is industrial land, so use it to put your hydrogen plant.

“We also look at the port of Sullom Voe, not just as an oil exporting port, but also whether it be used to support the offshore wind sector – and for the export of green hydrogen.”

All this will of course not happen overnight, and some elements might not happen at all. But the general direction of travel appears to be clear, at least to those of the Orion board, as industry needs to reduce emissions, and fast.

So how will the community be involved in all this? Neither the oil industry nor the council has a particularly strong record in participatory democracy. In fact, very little of this has so far been communicated, and the project has no elected members on its board.

An Orion status report from November last year identified “local communities and the press taking issue with the project due to lack of understanding or misinformation” as a key risk to the project.

“Communication is absolutely critical”, Newcombe insists, adding that a strategy to do so was now in place including community engagement, a website, stakeholder meetings, engagement with industry and government.

A webinar, hosted by HIE earlier this month and published on YouTube has had well over 400 views so far (see below).

“There is certainly intent to build communication. I am not saying ‘improve’, because we wanted to be at a place where we actually had something to say, and we believe now that we have something to communicate,” Newcombe said.