IT WAS during the Italia ’90 world cup that Jonathan Sutherland became hooked on football, the sport he would eventually find his broadcasting career in.

The 13-year-old, a proud owner of a new Scotland away top, was left devastated when the country lost 1-0 to Costa Rica in their first match of the tournament.

The bitter pill was sweetened somewhat by watching idol Roberto Baggio strut his stuff on TV, the stars of the global game on show.

“That was it,” Sutherland says. “It was inside me, and I was just fascinated by it from there onwards.”

As the presenter of BBC Scotland’s flagship football TV show Sportscene, the beautiful game, and all its many warts ’n’ all quirks, is now a constant in Sutherland’s life.

The Sportscene couch in a Glasgow studio feels a heck of a long way from his home islands of Shetland, and in particular the smattering of houses in the “back of beyond” in Busta, where he grew up.

Born in 1977, living in Busta offered a sense of freedom, a country lifestyle and a rousing view over the water to Brae – “something I totally took for granted…now I live in Glasgow and have no view”.

It wasn’t until Sutherland was around 11 or 12, though, that football began to truly seep into his life.

“Before that I would play football with my friends, but I wasn’t mad for it,” he says.

“But then about maybe 12 years old…I always remember reading the back pages of the newspaper my dad got, and [former Celtic player] Mo Johnston signed for Rangers. It was such a huge story.

“I didn’t really understand this whole west of Scotland culture, and I couldn’t really work out why it was such a big deal, but I was fascinated by it at the same time. I think that really engaged my brain and then drew me into the fascinating, mad world of Scottish football.

“I started watching Sportscene to pick up information and see what it was all about, and I just got sucked in.”

The disappointment of Scotland’s short stint in the 1990 World Cup didn’t deter Sutherland, who remained keen on football as he began to dip his toes into broadcasting in his early twenties.

While he now speaks to the nation every Saturday night, Sutherland learned his trade at Pitt Lane in Lerwick with BBC Radio Shetland for a few years just before the new millennium.

“It was a fantastic experience which taught me so much about broadcasting,” he recalls.

“I knew nothing about broadcasting before I went to Radio Shetland. I didn’t even properly realise in my incredibly naive way that broadcasting was even a career for a journalist.” 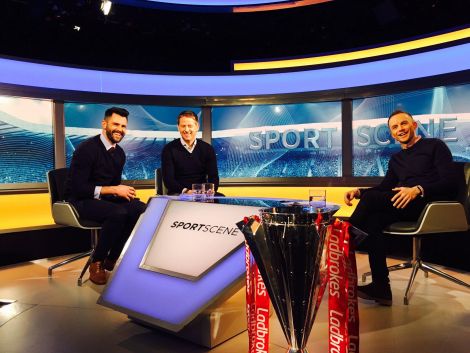 It wasn’t all rosy, though, to begin with. He only contacted the station after being persuaded by his mum to ask for work experience – something he did with reluctance.

“For about 12 to 18 months I was utterly terrible and horrendous at broadcasting, and very nervous as well.

“I listen back to myself continually to try to get better, and try and stop doing all the things I hated the sound of. And slowly over time I got better, and as you get better you get more confident.”

He credits his time at Radio Shetland as “one of the most rewarding experiences” of his life, although with his foot in the BBC door, the fanciful notion of working in the corporation covering football began to take hold.

“My attitude was always even if you don’t know how to do something when they ask you to do it, just say you’ll do it, and work out how to do it afterwards,” he smiles.

Heading south – and back north again

With this ethos in tow Sutherland moved south in around 2003 to work in Glasgow on sports bulletins for BBC Radio Scotland.

But he was back in Shetland in the 2000s to swap broadcasting for bylines as deputy editor of new-fangled newspaper Shetland Weekly. The publication didn’t last long, unable to muster a fight against the established Shetland Times, while internal staffing issues proved toxic.

Sutherland doesn’t like treading on old ground, and it is clear he isn’t keen to dwell on the ill-fated episode in his career.

“I’d always wanted to work in journalism, and I felt at the time I got stuck in a rut at BBC Radio Scotland,” he says.

“The opportunity came up to start up a newspaper in Shetland, and I thought, that sounds quite good. I always wanted to do interesting things and different things with my life – I didn’t want to just necessarily stick to one career path.”

After leaving the paper Sutherland yo-yo’d back to Glasgow, freelancing for the BBC before eventually landing a job as assistant producer on Sportscene.

For those who may view football as a bunch of sweaty men lumping a ball around a pitch, Sportscene is in effect Scotland’s Match of the Day – the highlights programme rounding up the day’s best action.

In addition to anchoring the programme Sutherland has also indulged in commentary, as well as pre and post match interviews and sports reporting.

From the despair of Shetland Weekly imploding to working on a national football programme, it was certainly a turnaround in fortune.

He takes a moment to credit the role of his parents, who are still living in Shetland. “I think something that me and my two sisters probably took for granted was our parents’ positive mental attitude about achieving stuff in life,” Sutherland continues.

“The older I get the more I realise how lucky we were to have such amazing parents, who inspired us to have a positive mental attitude and be able to deal with bumps in the road and have a bit of resilience and carry on even when episodes like the Shetland Weekly were difficult to handle.”

Sutherland is well aware of the upwards trajectory of his career, saying it is “slightly ridiculous that a guy from the back of beyond can be presenting Sportscene, the programme that I grew up watching”.

Sutherland is now firmly caught up in the self-proclaimed “whirlwind of nonsense” involved in Scottish football – something he says is “madcap, and sort of insane, to a Shetlander”.

“Growing up, watching this madcap nonsense, wrapped up in all sorts of west coast of Scotland culture…it was just like a foreign country, and it still kind of feels like that to me,” he says. 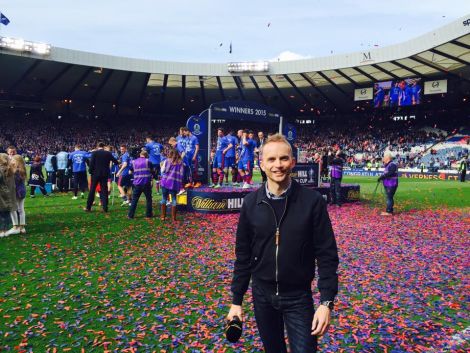 After the interview Sutherland is off to cover a Celtic press conference, while on the same day, eight Aberdeen players went into self-isolation after breaking protocol and visiting a bar.

“Every day is like there’s no escape from football, it’s just part of my life,” he smiles. “I think one day maybe in the future when I’m a bit older I might step back and look back at it and think about it in a little bit more context.”

It is obvious Sutherland loves what he does; he speaks down the phone with a zing, and an energy which perhaps belies his status as a father to a new baby.

But the most important question: who has been his favourite interview in football?

The broadcaster, alas, sheepishly admits he is somewhat lacking in the anecdote department.

“The thing is…it’s quite often not an enjoyable experience, interviewing a current manager, because there’s a bit of a confrontational aspect to the journalist,” he continues.

Sutherland does, however, pinpoint former St Johnstone manager Tommy Wright as someone who sticks out – with the Northern Irishman not afraid to bite back.

“It could get quite bullish, it could get almost cantankerous, but there was an innate good humour behind him and everything he said, and it meant it would be a genuine human interaction.”

“He understands what journalists are trying to get at, and you have to be honest more or less, and be honest with the public.”

And like many who live away from the isles, absence seems to make the heart grow fonder.

“You take all these things for granted when you’re a kid,” he says, thinking back to growing up in Busta.

“You think it’s normal, then you come and live in a place like Glasgow and you see how kids grow up here. It’s not normal for kids from cities.

“We’re so lucky to be brought up in such an amazing place. The more I’m away from Shetland, the more I’m in love with Shetland, no doubt about it.”

Work will keep Sutherland in the big smoke for the time being – with the Scottish football season in full flow, barring some Covid-19 related postponements, he is needed to navigate his audience through the tumult and tactics of the country’s favourite sport.

“Working on Sportscene feels a million miles away from when I was 12 years old in Shetland,” Sutherland says.

“This is not something you’d ever imagine doing at that age. So yeah, I’m hugely lucky to be doing this job. Especially in these difficult times…and I’m on the TV getting paid to talk about football. I couldn’t be luckier.”

Christmas 2021 – Send us your festive photos

A lifetime at sea