A WOMAN has spoken about the “heartbreaking” experience of seeing her seven month old daughter catch Covid, who is thought to be one of the youngest to have had the virus in Shetland. 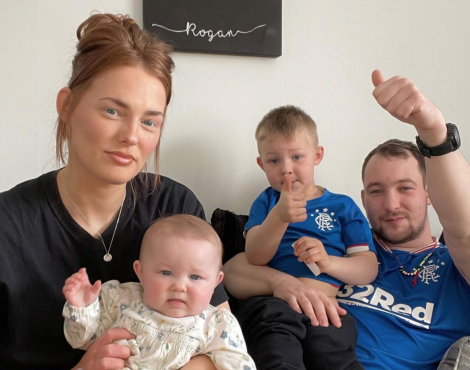 Donna Tulloch, from Mossbank, said her daughter Macy was out of sorts for a few days, was warm to touch and would not eat for a period of time before she started to pick up again.

Her older child Rogan was the first in the household to test positive but he had no symptoms and was “completely fine”, while she and her partner Liam later returned positive results too.

The NHS says that children can get coronavirus, but they seem to get it less often than adults and is usually less serious.

Speaking after her family recovered from having Covid, Donna said she and her two children were contact traced on 14 March – Mother’s Day – before being tested. This was around the time that the school in Mossbank closed for a day following a connected Covid case.

“Rogan’s came back positive, but we were both negative,” she said.

“Rogan was completely fine – no symptoms, you would never of known unless we took the test.

“Two days later Macy starts with a runny nose, you could tell her throat was causing her bother, croaky way…sneezing and on and off coughing, so I phoned to get a test for her. That night it came back positive.

“She went downhill that night and was very warm, wasn’t taking her milk well, she wouldn’t eat – she just wasn’t herself.

“That night and the night after were very unsettled. She was up in the night, which wasn’t like her, and her naps were out of sort. Just in general everything was out of sorts for her.”

Donna and Liam used Calpol and ibuprofen, and after about three days “we were starting to get back on track”.

“I’d say for about five days she wasn’t fully herself but much better after three.

“I think it was then the next day I tested positive, which was inevitable really.”

Donna said she obviously wasn’t going to socially distance from her own baby, who needed her help and comfort.

“She hadn’t been unwell in her seven and a half months of life so this was so sad, under the circumstances.”

She said with four positive cases in the household “luckily all in all no one was very unwell with it”.

Donna herself had head and body aches and a slight sore throat, while she lost her sense of taste and smell.

“My partner Liam was the last to test positive and he got migraine type headache but luckily that was all, he was the one in our house to have had the Covid vaccine,” she added.

Donna stressed that all guidelines were being followed. “It’s just an unfortunate situation and thankfully we made it out the other side.”

“The latest cluster had people from various age groups affected, not all of them had symptoms though because we now do the non-symptomatic testing of contacts,” NHS Shetland’s consultant for public health Dr Susan Laidlaw said.

There were a total of 16 positive Covid tests during the seven days from 14 to 20 March according to figures published by Public Health Scotland.