THE SCOTTISH Fishermen’s Federation chief executive has used a visit to Shetland to highlight the challenges posed to the industry by high fuel prices, “mismatched” quotas and other marine developments.

Elspeth Macdonald was in the islands on Thursday to meet local industry representatives, including a visit to Lerwick Fishmarket.

She said the industry – which in Shetland is worth some £330 million a year – had faced a “challenging couple of years” and warned that the rocketing cost of fuel internationally in the run-up to and since Russia’s invasion of Ukraine was having a particular impact. 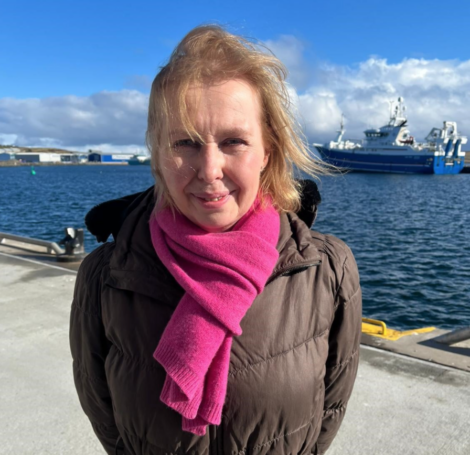 While acknowledging that all sectors and households were feeling the brunt of the steep rise in fuel costs, she said it was essentially fishing’s “biggest running cost” and boats are “going to have to be careful” about which opportunities to catch fish they took.

Macdonald pointed to the support being offered by the likes of the French government not only to its fishing fleet through a fuel subsidy, but also its domestic customers where the increase in the energy price cap is “considerably smaller” than in the UK.

She noted there appeared to be a “very different attitude” in “how they’re treating consumers and businesses”.

Macdonald backed calls from the Shetland industry this week for an end to the “mismatch” in quotas for species including cod.

“There’s a mismatch between I think the science, which is very out of date, and what the fishermen particularly up here are seeing on the ground, and I’ve seen some fabulous big cod on the market this morning, tremendous fish,” she told BBC Radio Shetland.

“There’s a real problem, and I think it is acknowledged by the scientific community, increasingly, that the scientific model that predicts and gives advice on how much cod can be caught on an annual basis is no longer fit for purpose.

Macdonald also said there were “real concerns” about the threat posed to fishing by other marine developments including protected and conservation areas, and offshore areas being pinpointed for renewable energy projects.

She called for government to “take a more holistic approach to marine spatial planning”.

“There’s real issues of displacement and the industry not being able to fish in places that it traditionally has,” Macdonald said, acknowledging the need for marine renewables “for the transition to net zero, but we also need to eat and our food security is every bit as important as our energy security”.

Macdonald added that the fishing industry harboured concern about some of the policy decisions of the SNP in conjunction with their Holyrood government partners the Scottish Greens.

She suggested the narrative coming from the Scottish Government was that “fishing is a bit of a problem to be controlled and managed rather than something to be valued and recognised and supported” and “there’s much that we’ll be doing to press the case for industry in that policy development”.

People invited to get rid of unwanted marine pyrotechnics