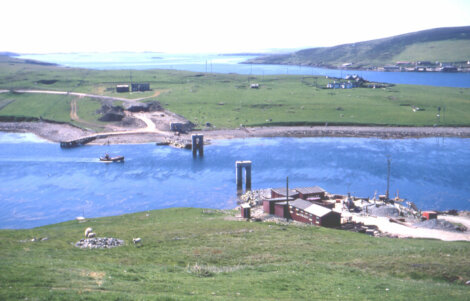 IT WAS fifty years ago on Monday (18 October) that the Burra and Trondra bridges were officially opened – ending the island communities’ reliance on travelling to the Shetland mainland by boat.

It helped drive up the populations of the two islands, increasing connectivity and allowing locals to travel more freely for work and leisure.

Adalene Fullerton, who chairs the Burra History Group, said the bridges brought “quite a massive change” to the islands.

Now aged nearly 70, she was in her teens when the bridges were introduced.

“Your ability to go out of Burra was ruled by the ferries,” Fullerton reflected. 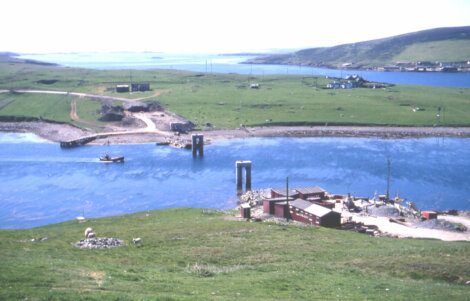 Before the bridges there were ferries three times a day from Hamnavoe in Burra to Scalloway, while there were also fewer regular sailings from Bridge End.

But many islanders were happy to take to the water themselves, especially in the summer months.

“A tremendous amount of folk had peerie boats that you could use in the summer to go to Scalloway or whatever,” Fullerton added.

The arrival of the bridges though, between Burra and Trondra and Trondra to the Shetland mainland, opened up new opportunities for islanders.

“It meant you could have a job outwith Burra and live in Burra,” Fullerton said.

“And of course, prior to the bridges, if you wanted to go on to higher education you had to go to Lerwick.”

Fullerton said she essentially left Burra at the age of 11 to continue her education in Lerwick, living with lodgers. 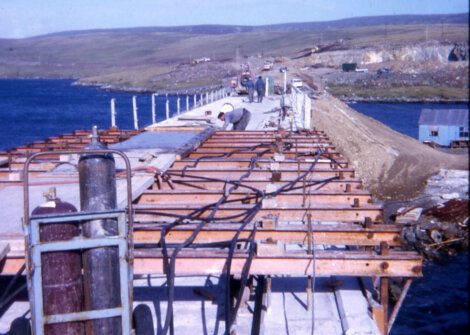 But the bridges allowed youngsters not keen on staying away from home to remain in the islands.

“You could continue your education and still bide at home, and you could have a job anywhere on the Shetland mainland basically and still have your home in Burra.

“I was working in Lerwick, and I married a Burra fisherman. We married in 1973, so the bridge was here, so we could live in Burra and I could still get to my job in Lerwick.”

Work first started on the project in 1965, and the scheme also involved widening roads and the making of new sections where none previously existed.

They are not the largest in size, coming in at 500 feet each. Both bridges are identical and consist of twin-welded continuous steel plate girders carrying a reinforced concrete deck.

The consultant engineers were Edinburgh’s Blyth and Blyth, although the then Zetland County Council was involved in work such as making the concrete decks. 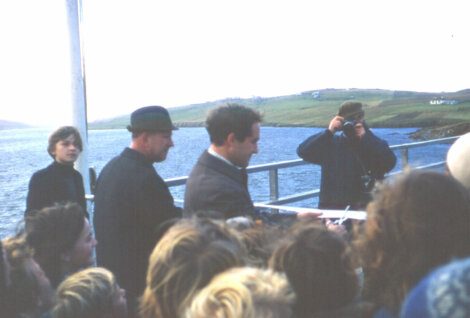 Under the supervision of Jack Moar, the then county road surveyor and a main promoter of the scheme, Joe Gray was the council roads engineer responsible for organising the squad of local workers.

“I was the engineer who did most of the survey, setting out and site supervision of the associated roadworks for the scheme,” he said.

“We had a small boat at the East Voe side that we rowed in to Trondra with to do our work.

“Most of the workmen stayed in Trondra in an old rented cottage or caravans.”

By 18 October 1971 the bridges were officially opened by MP George Younger.

Just a few years after the bridges opened the council built the Huisdale housing scheme in Burra as the population began to swell.

This was particularly the case for Trondra, where the population increased “fairly rapidly”. 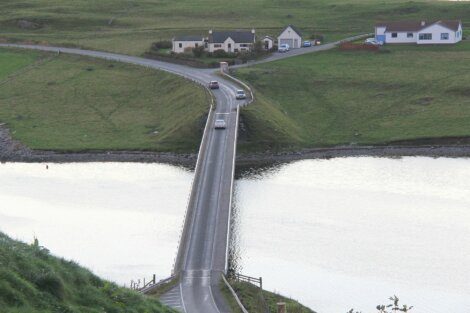 The Trondra bridge in operation, photographed by Jim Mullay.

It also changed how bairns accessed education, with secondary children in Burra moving to Scalloway and the Bridge End school closing.

Around the time of the bridges there were four general shops and a butcher’s in Burra, but that fell away to leave just the one shop remaining.

“But do I think the advantages of the brig very much outweigh the disadvantages,” Fullerton said, adding that at the time most people were in favour of bridges.

Meanwhile the Burra History Group hoped to commemorate the anniversary but the pandemic threw a spanner in the works.

However, there are hopes to possibly hold an event in Burra in November.

If it goes ahead, it will likely be well attended – with Fullerton saying that despite her island opening up, the local community remains close-knit.

“Fifty years on, and I think in Burra we still have a good community spirit,” she said. 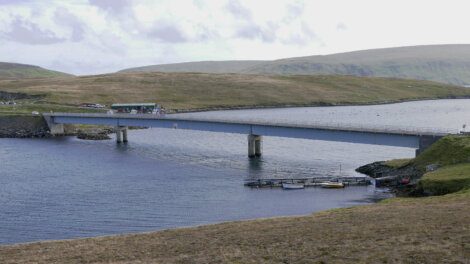 Halloween house display set to be ‘biggest’ yet