A LOCAL gender equality campaigner has started a silent vigil outside Lerwick Town Hall in an attempt to force Shetland Islands Council (SIC) into talks with the organisers of the town’s world-famous Up Helly Aa fire festival over the exclusion of girls and women from key parts of the event, which would have taken place today (Tuesday) were it not for the Covid pandemic.

Peter Hamilton, a former Anderson High School teacher, believes the local authority is in breach of equality rights legislation by allowing Lerwick Up Helly Aa and the associated junior event to use a number of public buildings and locations.

By using this lever, he hopes to pursue the council to actively seek dialogue with the committees running both festivals to facilitate change.

Hamilton, a former inclusion manager who now spends his time as a research student, claims the festival in its current form actively discriminates against gender and reinforces harmful gender stereotypes which ultimately lead to violence against women.

Only men feature in the squads which participate in the famous torch lit procession culminating in the burning of a replica Viking longship in a play park in Lerwick, and then head out to halls across town to perform acts.

Women rights campaigners have been demanding for years that at least the junior version of the festival should start allowing girls into its ranks, but all calls for a gradual change have so far been resisted.

There is however significant support, including from many women, for the format of the festival to stay the same.

The Lerwick UHA committee itself has so far avoided participating in any debate other than expressing its confidence that the festival would return in 2023.

Hamilton said he is aiming at the local authority with his protest because the council has a duty to promote equality but, in his view, is failing in its obligation to actively eliminate all forms of discrimination in exercising its functions.

Barring girls and women from a public play park by an unaccountable organisation and the civic reception held for the all-male jarl squad in the Lerwick Town Hall were two examples where the SIC was not fulfilling its equality duties, he claimed.

The 54-year old veteran campaigner said his repeated calls to local politicians such as Northern Isles MP Alistair Carmichael and Shetland MSP Beatrice Wishart to engage in the issue have all fallen on deaf ears. 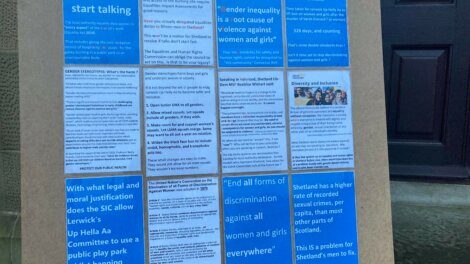 A letter to SIC convener Malcolm Bell to explain how the council could justify giving “an unaccountable group that discriminates against women and girls” the use of the George V play park remains unanswered.

“This protest is in response to the failure of SIC convenor Malcolm Bell to answer a simple question, and Lerwick’s Up Helly Aa committee saying they will go ahead next year with ‘the same format’,” he said.

“This and because the current men-only format of Lerwick Up Helly Aa and Junior Up Helly Aa is demonstrably harmful and must change.

“Everyone in Shetland knows many concerned voices have been raised, and ignored, for too many years. It has felt for some time that the concern is growing.

“If I was on The Lerwick Up Helly Aa committee though, I would be worried about how many folk could be protesting here when the next civic ceremony happens.  Let’s hope protests on the day of what should be a wonderful, safe and inclusive community event do not need to become a tradition.”

He added that it was well-established now that any form of sexist discrimination feeds into gender based violence. As such the topic has become a public health issue, he said, “for which action is overdue”.

“No one is suggesting banning all male squads. Hostesses will still have their important role. But those girls growing up in Lerwick that want to carry a torch and go out in a squad should be able to do so,” Hamilton said.

“It can all be fixed very quickly, and it will be now, one way or another. Unless there are to be talks, I will be complaining to the Scottish Human Rights Commission at the beginning of March.”

Screenplay to ‘go into retirement’ after 2023 festival