SHETLAND Islands Council says concerns over the number of parking spaces being mooted for the redevelopment of the former Anderson High School site will be considered before a planning application is submitted.

It comes after concern from local residents and the chairman of Lerwick Community Council that there will not be enough parking spaces for the number of houses.

Community council chairman Jim Anderson said he felt this “flew in the face” of planning policy.

Meanwhile residents of the nearby Gressy Loan have clubbed together to respond to a consultation on the redevelopment – and they said there stands to be “significant parking underprovision” as well as underestimates when it comes to traffic.

No formal planning application has yet been submitted for the mixed-use redevelopment.

However, the latest in a line of consultation events on the make-up of the site was held in Lerwick last month, with people were asked for their views.

Writing in a letter in response to the consultation, the Gressy Loan residents said they were not against redevelopment but warned “major concerns” still stand.

James Johnston, on behalf of residents, added in a covering letter that locals felt their views aired at a previous meeting with SIC officials and councillors were not acted on. 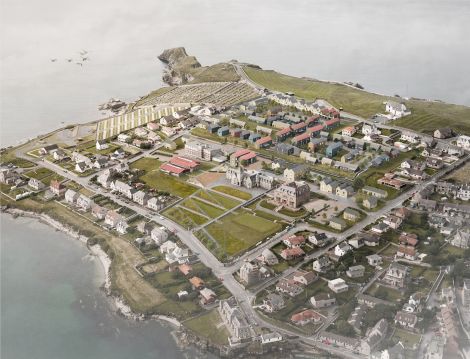 Redevelopment of the Knab site is a key part of the SIC’s plan to tackle a housing shortage in the isles.

Gressy Loan is the steep road which links the top of the Knab to Twageos Road at the bottom.

A total of 160 parking spaces are earmarked for residents, and there could be around 140 homes of varying sizes.

There are 72 spaces proposed for wider community use of the retained buildings.

The council’s own local development plan says residential development should have one and a half parking spaces per one bedroom unit, rising to three spaces for houses with four or more bedrooms.

It adds, however, that a reduction in the overall parking provision may be reduced within conservation areas or where communal parking is provided.

The residents also said they were “dismayed” to learn that around 200 people could be accommodated in a proposed New Life church building in the old school science block on the site.

They also warned about the impact of more traffic in the area.

“We cannot stress enough, that more parking on the road, added to the increase in traffic is going to obstruct the flow of traffic and cause hazards increasing safety risks for other vehicles, pedestrians and cyclists, particularly in dark winter conditions,” the residents wrote.

“In addition, as you will be aware, the coastguard base is situated at the foot of Gressy Loan.

“During an emergency (such as a medivac, which happens quite often), coastguard personnel arrive in a hurry and often abandon vehicles in a rush to attend the situation.

“This can currently cause hazards in the road, which due to the current low density of parking requirement, is manageable, however with an influx of additional vehicles might mean that emergency staff are not able to attend emergencies promptly, or at all.

The residents – who sent their letter to Shetland’s MSP and MP as well as local councillors – are also concerned that the number of access points to Gressy Loan could be increased.

It comes after James Paton of the Sooth-End Residents Association said the proposed housing in the area was a “massive over-development” for the site.

However, he said the amount of land taken up in “apportioned car-parking is simply a waste of land, that could be for inhabitants and visitors amenity and enjoyment”.

Lerwick North and Bressay councillor Stephen Leask told Monday’s meeting that a key thought behind the project was to be innovative – including taking into account people using less cars in the route to net zero.

Speaking in response to the concerns, the council’s development director Neil Grant said the feedback will inform the local authority’s planning application.

“We are aware of the concerns which have been raised by residents; these have been logged and included in the recent consultation on the infrastructure and public realm for the site, which includes parking and access,” he said.

“The points which have been raised and the feedback will be considered in a planning application for the Knab site infrastructure and public realm, which will be submitted later in the summer.”

The redevelopment of the site will take place over phases, with most of the non-listed buildings demolished first before housing is constructed.