TODAY marks the last chance for candidates to stake their claim for tomorrow’s (Thursday) council elections.

Polling places will open their doors between 7am and 10pm, and results will be announced on Friday during a count at Lerwick Town Hall.

For some candidates it was their first foray into campaigning, while for the more seasoned ones it was just the latest election.

The Shetland North and North Isles are uncontested, so there will be no voting in those wards.

There has been plenty of leafleting, door knocks and social media posts during the campaign – and some debates too.

The first ward to enjoy hustings events was Shetland West, while last night (Tuesday) it was the turn of Lerwick. 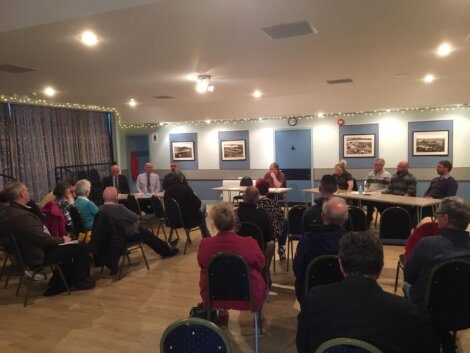 The debates, hosted by Lerwick Community Council in the Sound Hall, saw around 30 to 40 folk turn up.

Some of the topics raised during questioning and comments included housing, depopulation and the council’s spending.

“There was lots of agreement and lots of positiveness and it was well attended from all the prospective candidates and members of the public,” Anderson reflected.

On tomorrow’s ballot papers folk will be asked to rank their ward’s candidates in order of preference, under the single transferable vote system.

A guide on how the voting system results in councillors being elected can be found below:

Many people in the isles and elsewhere in Shetland, however, will have already returned postal votes.

Not decided yet on who to vote for? Shetland News‘ election page has a list of all candidates, including their election statements.