POLICE Scotland has defended its actions after it emerged that officers threatened to charge a local man with drugs possession after his regular delivery of prescribed medicinal cannabis was intercepted at the Royal Mail sorting office in Lerwick on Saturday.

Liam Lewis has now been issued with a recorded police warning – while the medication he needs to manage debilitating chronic migraine has been confiscated pending further investigation.

The 28-year-old said he was “distraught” and felt “bereft as I’ve now no medication and no chance to live the life I’m entitled to through the use of my medicine”. 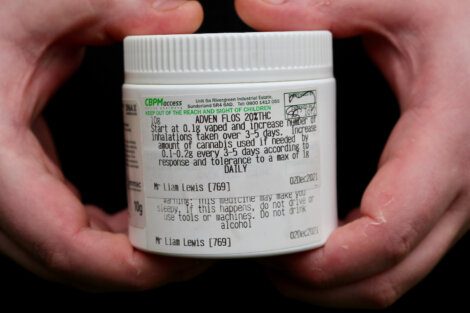 The medication Adven Flos 20 and Adven 20 THC oil is prescribed outside the NHS by Sapphire Medical Clinics in London.

The use of medical cannabis was legalised for prescription in November 2018 across the UK.

Lewis said to get access to the clinic he first had to exhaust three or more treatments on the NHS.

However, police said Lewis was unable to provide satisfactory evidence that the medication had been prescribed legally when he and his husband attended Lerwick Police Station on Sunday.

Lewis said he has been on medicinal cannabis for about two years, and to prove that people are legally entitled to use cannabis for medical reasons they are being issued with a MedCann ID card.

He added: “The impact of the warning has been devastating not only psychologically, through which I am a warrior of complex post traumatic stress disorder, and physically – I’m now without my only source of life giving saviour medication and basically have to relapse in my condition which affects me daily.”

A Police Scotland spokesperson said: “A 28-year-old man was issued with a recorded police warning following the seizure of a controlled substance which had been found by officers within a sorting office in Lerwick on Saturday, 22 January.

“He was unable to provide satisfactory evidence to police that the substance had been prescribed legitimately by a medical professional and when the recorded police warning was given to him, he accepted it.

“Officers will continue to engage with him as we try to establish the full circumstances of the situation.”