HISTORY was made this morning (Monday) after Shetland Islands Council appointed its first female leader and convener.

The top jobs went to Emma Macdonald and Andrea Manson respectively, who both represent Shetland North.

They were appointed following votes at what was the first meeting of the full council of the new term.

Speaking after the meeting, former depute leader Macdonald – who beat Stephen Leask by 11 votes to nine – said she was “quite surprised – there’s a lot to get your head around”.

“I’m really excited about getting started,” she added.

“Once everybody gets their positions and starts to work together, we can start to build something good.”

Macdonald – who was first elected as a councillor in 2017 – said being Shetland Islands Council’s first female leader “shows that this is a role that anybody can do, man or woman”.

When asked what the some of the challenges ahead are, Manson said: “We have the challenges of fixed links, of the ORION project, of ever-increasing costs of living here. That will be the main things.”

The Shetland North member has racked up more than two decades of experience as a councillor in two separate stints, from 1983 to 1994 and again since 2012. 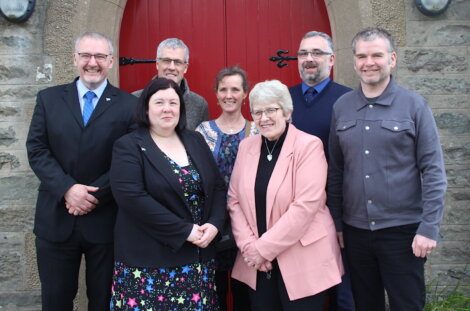 Despite two females taking on the chamber’s top jobs, there are only five female members of the 22 councillors elected so far. One vacant seat remains in the North Isles.

There was a slew of other appointments made at Monday’s meeting, filling up the council’s committees.

Davie Sandison – who has experience of the college sector – will preside over the education and families committee, while new councillor and business owner Dennis Leask was elected chair of the development committee.

When it comes to the chair of environment and transport Moraig Lyall narrowly beat Robbie McGregor 11 votes to ten.

SNP councillor McGregor, however, was later appointed chair of the planning committee.

Veteran councillor Allison Duncan has kept his role as chair of the audit committee, while John Fraser was appointed to preside over the integration joint board, which brings together the council and the NHS.

New councillor John Leask – who has experience of shipping as well as the oil and gas sector – was given the harbour board job while Neil Pearson was appointed to lead the licensing committee.

Only one councillor kept their chair position – Allison Duncan, who leads the audit committee. Ex-transport man Ryan Thomson, who backed out of going for the leader post, did not go for any of the main roles.

Meanwhile all of the council committees were filled with representatives from across Shetland.

Council meetings will get underway properly from June.

Archaeologist warns against approving plans for house near broch: ‘This location is totally inappropriate’