IT WAS a fitting way to round off a month of sea swimming for charity – making a splash in Lerwick Harbour with friends.

Anita Georgeson has raised more than £7,500 so far for Cancer Research UK by taking a dip in the sea every day in November.

Today (Tuesday) marked the end of the month-long challenge, and the care worker and veteran fundraiser was joined by friends Emma Knight and Linda Moncrieff this afternoon with a jump off the small boats harbour.

It marked 30 days since her first swim not too far away at Bain’s Beach on 1 November.

She said she is “absolutely blown away” by the amount raised so far and expressed her thanks to everyone who has donated.

The harbour jump was quite the experience for Anita, who said she “hates going underwater” after being pushed in a swimming pool as a child.

But alongside her swimming friends there was a crowd of supporters cheering her on.

Anita took on the challenge, which has taken her to beaches across Shetland, to raise money for a charity close to her heart.

Her dad Jim Coutts passed away from cancer earlier this year, and during the month she also lost her friend Jennifer Watt to the disease.

Anita has been joined throughout the month by some intrepid friends happy to take a dip too for moral support, with Emma and Linda regular companions.

The weather has typically been changeable, with the recent stormy weather adding a blustery twist to the swims.

Anita said while the total raised so far has been “outstanding”, the challenge has offered moments of reflection too.

“Part of me feels sad as I’m sure many folk who have donated have been affected by cancer, lost family and friends due to this horrendous disease.

“It’s heartbreaking and it’s brutal. But we find strength and we stand up tae it fir the folk we lost and never give up hope fir da folk that’s still living we it.”

Anita said people outwith Shetland have also been donating and encouraging her throughout the month.

“I just want tae thank everybody – what a huge difference this will make to so many folk’s lives.

“I’d also like to thank Emma Knight and Linda Moncrieff for all da support they have given me throughout this month. 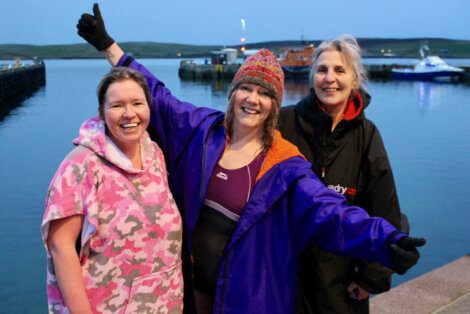 Anita Georgeson (centre) with Emma Knight (left) and Linda Moncrieff (right) after jumping into the water in the centre of Lerwick. Photo: Chris Cope/Shetland News

“Dir been some emotional days through it and some days the weather has been brally fierce bit wir always managed to make it a peerie fun raising money for Cancer Research cold water challenge.”

But the cold water fun isn’t done just yet. Anita is inviting anyone keen to brave the water to join her at resplendent surrounds of the St Ninian’s beach on Saturday (4 December) in a big dip.

The event will take place at around 2.30pm.

It isn’t the first foray into fundraising for Anita, who was recently picked by local MSP Beatrice Wishart as Shetland’s ‘local hero’

Back in 2018, for instance, she climbed to the top of Mount Kilimanjaro to raise funds for local mental health charity Mind Your Head.

In recent years she has also raised cash for Edward Thomason & Taing support services, which included running a marathon from Sumburgh to Lerwick.