A FUNDRAISER is preparing to run five marathons in five days next month as intense training continues.

Michael Medici, from Sandwick, has raised more than £13,000 so far for MND Scotland. 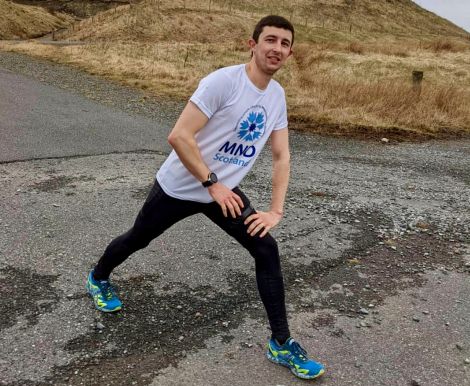 Michael Medici is getting ready to run five marathons in five days.

He is taking on the challenge after both of his parents were diagnosed with motor neurone disease in the space of around five years.

Michael thanked the Shetland community and beyond for helping him smash the initial fundraising target.

“That’s such a huge amount of money that would be so beneficial to supporting sufferers of MND or their families, or whether it’s going to research.”

The degenerative terminal illness affects the body’s motor nerves, which may cause people to lose the ability to walk, move their arms, speak, eat, drink and breathe unaided.

The disease is rare and affects around two in every 100,000 in the UK. Despite this, Michael’s dad Paul was also diagnosed with motor neurone disease in January 2018.

Since announcing the challenge last year, Michael has undertaken a strenuous training regime on Shetland’s roads ahead of the marathons starting proper on Monday 5 July.

Michael said he ran a total of 100km in a week recently, and over the last few months he has covered the marathon routes.

The fundraising total meanwhile received a boost last week to the tune of more than £2,000 from the sale of cookbooks organised by Iris Anderson from Whalsay, who was diagnosed with motor neurone disease.

She has raised more than £41,000 for MND Scotland through sales of the cookbook and other charitable efforts.