THE COMPANY which owned the Moorfield Hotel is to sell off the land as building a replacement would be “unviable”.

Stewart Campbell of hotel owner BDL Shetland said the company has already put feelers out regarding the land near Toy Town in Brae.

The £6.5 million Moorfield Hotel burned down in July shortly before it was due to close after its contract to house gas plant workers changed hands.

All 70 occupants and staff escaped uninjured in the fire, which initially took hold of the upper section of the hotel.

BDL previously did not rule out building a new hotel on the site but director Campbell has now confirmed to Shetland News that it will not happen.

“It’s just not economically viable,” he said. “It does not stack up”.

Campbell said that the insurance process around the fire is ongoing and could take another year to finalise.

He added that BDL could have taken a “punt” at relaunching a hotel to tap into the travelling workforce due to arrive in the isles over the next four years for the Viking Energy and HVDC transmission link projects. 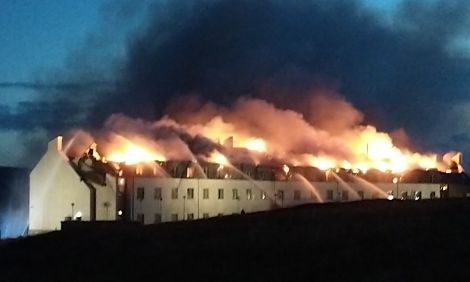 The number of workers between the two projects could reach a peak of up to 600 between autumn 2021 and 2023, but once the wind farm is operational only 35 jobs long-term jobs will be created.

Campbell said once those large construction projects are complete, the “hotel becomes unviable”.

Another potential issue would have been the time it would have taken to rebuild.

Campbell said professional advice highlighted that it could have taken two and a half years to reopen a hotel, with planning permission and building warrants needing to be sought.

He said BDL has issued a flyer regarding the sale of the land, adding that it could potentially be an attractive site for a residential development.

The 100-bedroom Moorfield Hotel was built seven years ago mainly to provide accommodation for staff at the nearby Shetland Gas Plant.

The hotel was due to close in August after oil and gas company Total decided against renewing its contract there. Instead it moved its workers to the nearby Sella Ness accommodation block.

Around 45 jobs were lost at the hotel, which also enjoyed popularity with locals for its food and drink.

BDL, meanwhile, recently dropped a legal challenge against the decision to allow the Sella Ness accommodation camp – which only has temporary planning permission – to stay open.

The company told Shetland News last month that legal advice suggested the economic case against Sella Ness was “significantly weakened” by the loss of the Moorfield Hotel.