A PHD student is set to carry out a study of orcas in Shetland over the next few years in a bid to better understand their foraging habits.

Julia Sutherland, who is with the sea mammal research unit at the University of St Andrews, said it will feed into research investigating causes of harbour seal decline while also helping to monitor the health of the orca and seal populations of Scotland.

She also won funding from the Marine Alliance For Science and Technology For Scotland (MASTS) for a drone, which will be used to help her study orcas from above.

She will first head to Shetland on the research project in this summer, before returning again in future years.

Sutherland also said the study will incorporate footage of orcas in Shetland captured by everyday folk.

Her interest in marine mammals stems back to seeing seals and dolphins at an early age when visiting her grandparents on the east coast of Scotland.

“Although my degree is in psychology, I was drawn to animal rather than human behaviour and have conducted animal behaviour research in areas as diverse as meerkats in South Africa and marine mammals in the Falkland Islands and Antarctica,” Sutherland said. 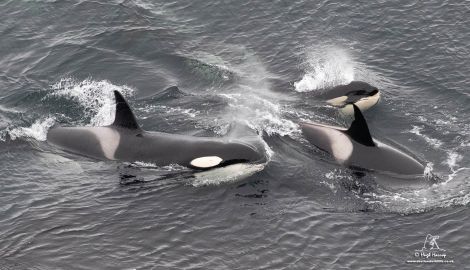 “The parallels between marine mammal and human behaviour were what really sparked my interest and orcas are a prime example of this.

“Living in close knit family groups, killer whales work together when foraging and share their food with one another, making them an interesting study species.”

Sutherland previously completed a masters in marine mammal science at St Andrews, which allowed me to study the “amazing creatures” in more depth.

“Shetland, with its frequent sightings of orcas, its strong community interest and local knowledge on wildlife, is the ideal place to further my research on orca.”

She said observations of orcas in Shetland can provide a “wealth of information in terms of where the go, what they eat and what effect their predation can have on prey populations such as harbour seals, which are undergoing regional declines around the North East coast of Scotland”.

Sutherland will be studying for her PhD until 2024, and she plans to do the field research in Shetland each summer between June and July.

This will involve land-based observations of orca, and the use of a drone to study their social and foraging behaviour.

“Sightings and images recorded by anyone interested in the orca – so called ‘citizen scientists’ – will be invaluable to document these wide-ranging animals throughout the year and in all parts of the country,” she added.

“Our primary aims are to better understand their foraging behaviour, what type of prey they are consuming and how much of it. This will feed into research investigating causes of harbour seal decline, and enable us to monitor the health of the orca and seal populations of Scotland.”

Sutherland said her PhD is a MASTS SUPER DTP PhD conducted in collaboration with Marine Scotland and NatureScot.

One of her supervisors is Karen Hall from the NatureScot office in Lerwick, and she is working closely with Hugh Harrop of Shetland Wildlife to collect data on the orca in Shetland.