LOCALS and tourists can enjoy learning first-hand about two endangered traditional craft practices as part of a small exhibition space attached to a new gift shop in the centre of Lerwick.

The Puffin Republic, run by the owners of French café C’est La Vie, opened its doors last week and includes a lace knitting exhibition by Sophie Peng along with a display from Eve Eunson on traditional Fair Isle chairs.

Sophie is studying for a PHD at Glasgow University and after moving to the islands to develop her studies last September she was able to meet local knitters – including Eve’s great aunt Mary Eunson – in Valerie and Didier Piquer’s town centre eatery.

As part of her eastern European studies she is researching Shetland lace and Haapsalu lace from Estonia and their contemporary application – which drew her to the islands to learn more about the community the practice emanates from.

Sophie, who wore a Haapsalu lace dress and Shetland lace stockings for her wedding on the historic university campus in Glasgow in 2019, is also showing a piece of Russian lace alongside an Estonian garment and a pair of Shetland stockings.

“It’s two crafts on the endangered list, the red list,” she said. “Buy one get one free! It’s a happy place for me to have a little break from just sitting and writing. I don’t like the idea that what happens in academia stays in academia.”

Sophie wants to produce academic work that “makes sense with everybody” and envisages nothing less than a “lace revolution” to raise up the price so people can make a living from the craft.

Using the back room of the Puffin Republic shop, an airy space facing the Esplanade and harbour, she hopes to “increase awareness” of lace knitting.

Professional lace making has been on the wane for some time and, having spoken to numerous local exponents, Sophie estimates local makers could be earning as little as £1.50 to £2.50 an hour – without taking into account the cost of materials and equipment required for their intricate, skilled work.

“You cannot really persuade younger generations to join this industry,” she said. “When people can get an income from making lace then we will have lace makers.”

One way of making the craft viable, she thinks, could be to target “high fashion”.

Rather than making garments such as Victorian-era shawls, she sees a future in designing modern objects that would have an everyday use – suggesting lace collars, for example, would “pair really nice on a black dress”.

“With those small things we can start our local brand – see if we could make it to the runway.”

Eve, meanwhile, began her concerted effort to shine a light on the practice of Fair Isle chairs with a funded research project back in 2018, followed by an exhibition at Shetland Museum and Archives over the winter.

A Fair Isle native and trained architect, Eve is following in her great-grandfather’s footsteps having learned the wood and straw working skills to recreate the island’s distinctive chairs.

Valerie and Didier became “big fans” of the project having enjoyed the museum showcase.

“We were just speaking and I said I didn’t know what I was doing after the exhibition shut, and I don’t have a working space,” Eve said.

“They have the back shop here empty, and suggested maybe I’d like to come and work out of here. It adds something to the shop and gives me a space to show off the chairs, and do some work.” 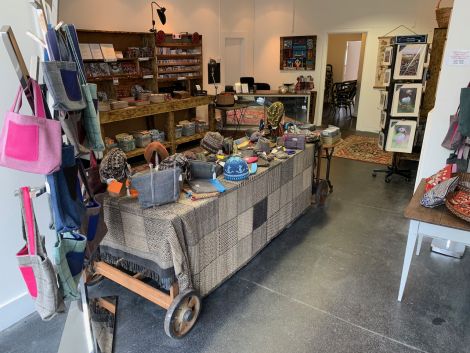 The “concept store” for Shetland designs has been opened by C’Est La Vie cafe owners Didier and Valerie Piquer.

Eve said that in the first few days the amount of visitors had been “tremendous”. The intention is that when talks and workshops are staged, coffee and cakes from C’est La Vie will form part of the experience.

She has already worked with Make|Learn Scotland to condense the technique of knotting for the Fair Isle chairs into three hour-long sessions for primary schools, which has been trialled in Bute and Glasgow, and the resources will be available online soon.

Eve is also working on her own version of a craft pack that will be available for sale locally and is aimed at all ages and abilities.

“It’s great to see tourists again, and so many of them, as well as lots of local folk who have popped in wanting to see the shop,” she said. “Lots of different people, young and old, folk I didn’t reach at the museum, partly with Covid.

“With this people really can just drop in the door and take five minutes out of their time – it’s been great.”

Over the summer Sophie is also manning the till of the shop, which the Piquers see as a “concept store” to promote their own Shetland-themed design ideas along with those of other local designers and artists.

Among these is a collection of Shetland tweed garments which were co-designed with Lyon-based Juliane Sievert, who they have been working with for several French museums over many years.

The collection comprises handbags, wash bags and key fobs. Didier said he felt they were “unique styles” and “pleasing to the eye”.

“Juliane had the idea to complement the beautiful tweed produced by Jamieson with the very soft veal leather leftovers used by a French luxury brand,” he said.

There are also a host of other shop-exclusive items including postcards, magnets, mugs, mouse pads and a Shetland postcards collection.

Also displayed in The Puffin Republic are Shetland and Fair Isle patterns knitted by Bel Gregson.

“The aim of the shop is to evolve over time always offering unique and interesting quality products for the discriminating individuals,” Didier said.

From Burra to Malmö for local artists