THE SCOTTISH health secretary was unable to provide any clarity over when Shetland could get a new hospital when questioned on the issue this week – but he did speak about the financial challenges of government.

The topic was raised with Humza Yousaf by NHS Shetland chief executive Michael Dickson during a Facebook livestream on Tuesday.

The prospect of a replacement Gilbert Bain Hospital is in the pipeline, but the process is at a very early stage.

Despite this, a question came in from a livestream viewer about when Shetland will get a new hospital.

But Yousaf’s response highlighted the financial challenges just now of running a government.

He replied: “I’ve been in government for the best part of ten years in various different roles, I’ve never known a financial circumstance as difficult as this one currently is – it’s beyond challenging.

“I’ll keep the capital budget under review. What I would say to people is we’ve promised to invest £10 billion of health capital over a period of a decade, and I absolutely understand the challenge in Shetland.” 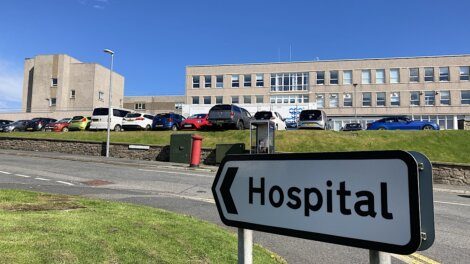 The SNP minster said he will speak more about these challenges with staff when he visits Shetland next week.

Speaking in response, NHS Shetland chairman Gary Robinson said if everything went smoothly the health board could be on site in three to four years.

No site, however, has been publicly earmarked for a replacement hospital.

Robinson said: “We know that public sector finances are facing a squeeze, but the Scottish Government continues to invest in capital projects and it continues to support us as we work through the Scottish capital investment manual process.

“We completed the strategic assessment stage of that process at the end of last year, before getting the green light to continue on to the the investment appraisal (IA) phase which we’re currently engaged in.

“There are then two final stages before any construction could begin. Those are the outline business case (OBC), and the full business case (FBC), with decision points at the end of each phase.

“The IA should come to the board early next year and, subject to approval to proceed, the OBC and FBC will follow on from that. Provided that approval is granted at each step, we will have what is often described as a ‘shovel-ready project’. This could potentially see us on site in three to four years time.”

The current hospital has been operating in its current form since the 1960s but there is little opportunity to keep up with modern standards.

A report to NHS Shetland members back in 2019 said: “The constrained site provides little opportunity for expansion and little or no variation to the layout possible in an attempt to come close to achieving the modern hospital requirements of today.”

Earlier this summer a Shetland councillor viewed to campaign for a replacement hospital after spending seven weeks in the Gilbert Bain following a stroke.

Robbie McGregor, 77, had huge praise for staff but said the building was “well past its sell by date’’.

Each drug-related death ‘somebody’s somebody’

Portable x-ray machine to be trialled in GP surgeries