ON Friday jarl Dwayne Davies should have been leading his squad through a day of merriment at Delting Up Helly Aa, one year later than planned.

But as a result of the continued effects of the coronavirus pandemic, his big day is now likely to take place in 2022 – two years after it was first scheduled.

Delting Up Helly Aa takes place on the third Friday of March, and alongside the South Mainland fire festival, it fell on the wrong side of the coronavirus pandemic in 2020 by a matter of days.

Speaking on the eve of what would have been Delting Up Helly Aa weekend, Dwayne said the fact that knowing for some time there is no festival taking place has helped to dampen the disappointment.

“I’m feeling not too bad to be honest – probably more to the fact we’ve known there has been no festival planned for several months now, so haven’t had the usual hype leading up to the big day,” he says.

“Normally, the jarl squad would be on cloud nine by now with the countdown on. But again, this year we are without our usual celebrations.

“It’s a lot less frustrating this year as we’ve known there to be no festival planned.

“Last year, however, was a lot different after having to postpone our festival nine days before it was due to take place.

“The sheer amount of work, hours and dedication the squad gave in the final three months after the Christmas break was staggering.

“Seven days a week till the early hours of the morning, every day, was hard work. 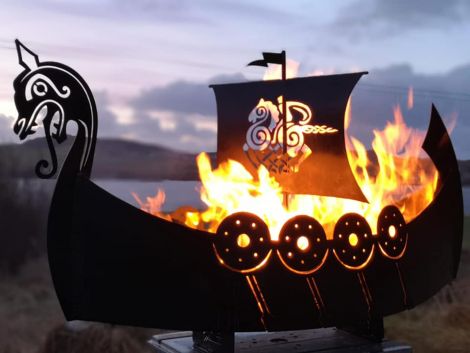 Dwayne has spent some of his spare time making Up Helly Aa fire pits.

“The tiredness didn’t get a chance to sink in as the adrenaline was so high which kept us all going.

“But like every other festival, event or business, we all have to respect the decision made by our government to come out of this pandemic the right way.

“Only when we’re told that gatherings of this scale can go ahead again will we then plan to start organising for what will be monumental festival.”

There aren’t too many practical issues of having Delting Up Helly Aa on hold for two years; with the jarl squad suits already complete and safely stored away.

“Everything that would normally roll over from year to year stands the same,” he said.

“The committee elects will all move back two years, providing we go ahead in 2022.”

Dwayne reckons the build-up to the 2022 festival will be “bigger than before” as people make up for lost time – and emotional too.

He joined the committee in 2010 and whilst his year was meant to be 2023, a reshuffle of members meant that his turn was moved forward to 2020.

“With there being no events for people to attend, folk will be itching to get back to normal and see friends and family at events like this,” Dwayne said.

“The community plays a huge part in Up Helly Aa too, so I think it will be extra special given how restrictive life has been since lockdown.

“Normally, it’s a sad day for the jarl squad to hand over the keys to the galley shed for the next squad, but I’m nearly throwing them now!

“If we go ahead on 18 March 2022, it will be exactly 1,100 days since the last Delting Up Helly Aa was held, so I would think emotions will be high on the day. I’m sure there will be a few onions chopped that day…”

Under current restrictions it has been relatively quiet on the Delting Up Helly Aa front recently, but “squad members have phoned, messaged or had a yarn in the car park about plans and help for when we mobilise again”.

“I even had delivery of a squad present last weekend from them which was fantastic.”

No small events are planned once restrictions allow, with the full focus instead remaining on the big day itself.

“The only thing we’ll do when allowed is meet at the galley shed to finish off things we never got around to in during the original build up,” Dwayne explains.

“There are odds and ends to do, and maybe a galley to paint…

“I personally think this year will continue to have its restrictions across the country, so I find it hard to plan anything just yet as it could be upturned at any point.

“The committee will continue to monitor the situation as we progress in the ‘road map’ out of lockdown, and when confirmed the scale of gatherings we need will we then make a further announcement of all things Up Helly Aa.”

There will be a small taste of Up Helly Aa, though, on Friday when a replica galley fire pit will be lit between 10am and 5pm outside the galley shed in Brae.

Folk are reminded not to touch or interfere with it for their own safety, and a committee member will be present when it is alight.

Similar to what other cancelled Up Helly Aas have done this year, a bill has also been made and will take pride of place next to the galley shed too.

Health board advises not to travel off the islands